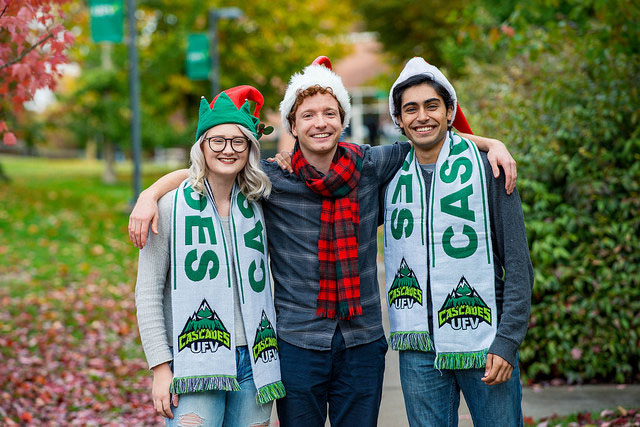 There was a lot to celebrate at UFV in 2017, as students, faculty, and staff continued to contribute to the social, cultural, and economic development of the Fraser Valley.

More than 2,700 credentials were awarded at four Convocation ceremonies in June.

UFV said thank you and farewell to President Mark Evered, who retired at the end of June after eight years at the UFV helm. The Student Union Society named Evered Hall in the Student Union Building in honour of him and his wife Maureen. He was also honoured with a Stó:lō naming ceremony, where he was given the name Al:Aliyatel, which means humble man, good at everything, works for the people. Evered reflected on his time at UFV in the cover story of UFV’s Skookum magazine. 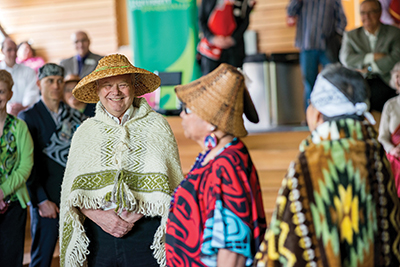 Mark Evered at his naming ceremony.

Chief Financial Officer and Vice-President Administration Jackie Hogan was appointed Interim President and Vice-Chancellor while UFV’s presidential search continued. A new president for UFV will be announced in 2018.

Nav Bains was elected chair of the Alumni Association, taking over from Nik Venema.

Both the men’s and women’s golf teams were national collegiate champions at the CCAA level, and Daniel Campbell took gold in the individual men’s category, and Maddie Kapchinsky won the women’s silver medal.

Among many other athletic highlights, a pair of Cascades standouts moved up to the pro ranks. Tristan Corneil (women’s soccer) suited up for a team in Sweden, while Kayli Sartori (women’s basketball) earned a contract in Lebanon.

UFV’s commitment to Indigenization led to the Witness Blanket coming to the Abbotsford campus for a two-month exhibit in the fall. The large-scale art installation, inspired by a woven Aboriginal blanket and designed to tell the story of the painful legacy of Canada’s residential school system, was created by master carver and Kwagiulth artist Carey Newman (Ha-yalth-kingeme). He spoke at the closing ceremony of the exhibit. 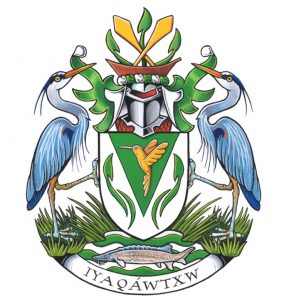 UFV unveiled its Coat of Arms in June. It features symbols of Stó:lō culture, local wildlife, and elements of the Fraser Valley landscape. It was officially granted by the Canadian Heraldic Authority under the authority of the Governor General of Canada.

UFV continued its practice of honoring those who exemplify its values by awarding honorary doctorates at its Convocation ceremonies to Andy Sidhu, Tamara Taggart, Kirsten Brazier, and Dr. Nadine Caron. 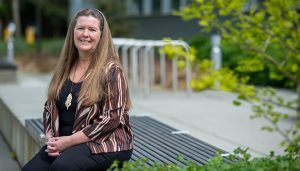 Dr. Lin Long continued in the second year of an NSERC Collaborative Research and Development Grant. Her Automated Honey Extraction System project, in cooperation with the Worker Bee Honey Company Ltd of Chilliwack, received worth $95,143 over two years. And Dr. Noham Weinberg (Chemistry) continued to conduct research funded by an NSERC grant that runs through 2020. He received $100,000 over five years. 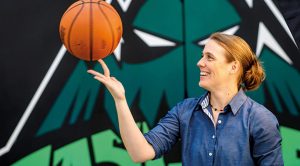 Dr. Joanna Sheppard (Kinesiology) partnered with the University of British Columbia and School District #43 (Coquitlam) to secure a $25,000 Learn to Play grant from the Royal Bank of Canada to build capacity for physical literacy for children.

And UFV continued in its partnership with Fraser Health, Seabird Island Band, and Stó:lõ Nation, working on a $99,000 grant from the Canadian Institute for Health Research. Their focus is a land-based resiliency approach to suicide prevention for Indigenous youth.

Dr. Jelena Brcic of the School of Business received a three-year $200,000 grant from the Canadian Space Agency to study group functionality in space by studying analogous environments on Earth.

Students and alumni also contributed to excellence at UFV in 2017. 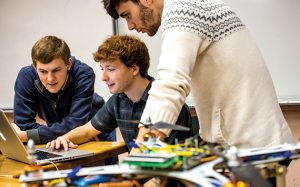 The Engineering Physics in Mechatronics program, now in its fourth year, continues to generate final projects that are both exciting and applied, some of which have led to employment after graduating. The team of Perrin Waldock, Dennis Schimann, Nikola Trotzuk and Alex Vogt built their own quadcopter.

Some graduating students and recent alumni from the math and science field participated in an eight-week coding program led by local industry experts, a partnership that led to jobs for several participants.

Theatre students moved to a new home on the Abbotsford campus, and some upper-level students were involved in writing and directing departmental productions, in addition to acting and backstage work.

Some students, such as Legal Admin Assistant graduate Kyla Giesbrecht (who is now returning for part-time Paralegal studies) used Continuing Education programs to springboard into new careers after being out in the workforce. 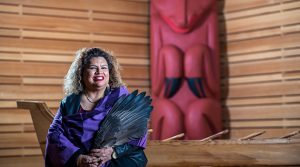 Emily Henry and Alexis Warmerdam were named Distinguished Alumni and Distinguished Young Alumni respectively. They received their awards at UFV’s annual Town and Gown fundraising dinner, a sold-out event that raised $85,000 in one night and a total of $200,000 when factoring in associated gifts.

Agriculture alumnus Sam Glasgow was actively involved in the rebirth of the local hop industry, capitalizing on the booming microbrew industry. And a bunch of bright berries, alumni from the College of Arts, contributed to the cultural scene of the Fraser Valley by publishing Raspberry magazine. Teacher Education alumni returned to campus to celebrate the 10th anniversary of the program. 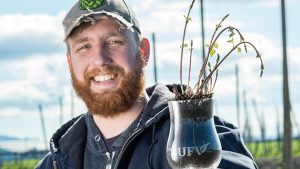 Also celebrating its 10th anniversary was the Centre for Indo-Canadian Studies, which rebranded as the South Asian Studies Institute at a special ceremony in May. SASI director Satwinder Bains took on a half-time role as principal of UFV India in September.

UFV hosted several notable community events in 2017. The Student Union Society brought Margaret Trudeau and her message about the importance of taking mental health issues seriously to campus in January.

Her son, Prime Minister Justin Trudeau, visited Abbotsford in May, meeting with representatives of UFV’s South Asian Studies Institute at the Guru Nanak Sikh Heritage Temple and visiting a SASI exhibit on the long struggle for the Indo-Canadian vote in Canada. 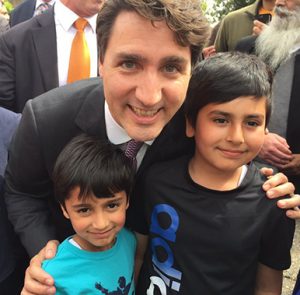 Dr. Gabor Mate spoke to an overflow room about the importance of treating the whole person and looking for the trauma behind the addiction when working with addicts.

Former pilot Jim Ryan shared his experience as a new quadriplegic with Health Sciences students and the general public. 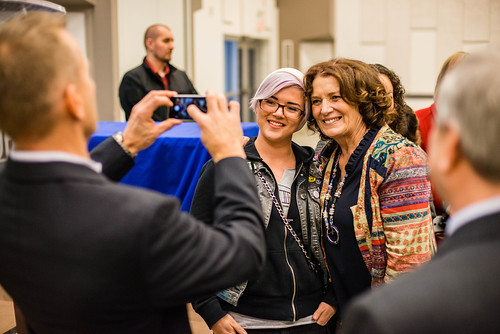