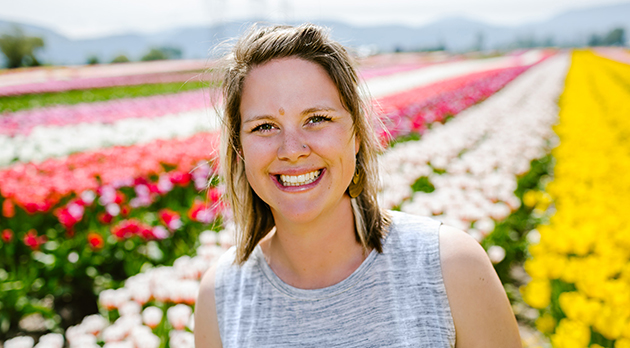 Like the windmills she once worked to improve, Alexis Warmerdam possesses potentially endless energy.

And she needs every ounce.

If that wasn’t enough, she was recently voted chair of the B.C. Young Farmers Association, won the 2016 Young Entrepreneur of the Year from Abbotsford Chamber of Commerce, and became the B.C/Alberta/Yukon representative for the Canadian Young Farmers Forum. All while continuing to work on her family farm near No. 3 Road.

With its living rainbow of colour stretching through the horizon, Bloom was actually too popular in its first year. Alexis quickly became a victim of her own success.

“When the event opened we had three times more people than I expected in my wildest dreams,” she says.

“I’m very grateful for that, but the popularity also presented challenges.”

To alleviate overwhelming weekend traffic, Alexis increased the price of weekend tickets and ensured online tickets were the preferred way of purchasing to anticipate staff levels and traffic management.

For Roadside, Alexis, 28, turned cornfields into mazes — with a twist. With other Fraser Valley corn mazes catering to families, she created three mazes, two for families and one specifically designed for the 19-plus crowd, featuring wine and beer tastings, a beer garden, and other festive fall fun.

On leased land along Abbotsford’s North Parallel Road just east of Whatcom Road, Alexis kept the community in mind while resolving the labour challenge of running short-term seasonal businesses, with Bloom (April–May) and Roadside (Sept–Oct.). She cleverly solved the issue by filling staff positions with volunteers from various non-profit groups. In exchange, they received money for their organization. Partners ranged from the Kiwanis Club to the Canadian Ski Patrol, which provided on-site first aid. 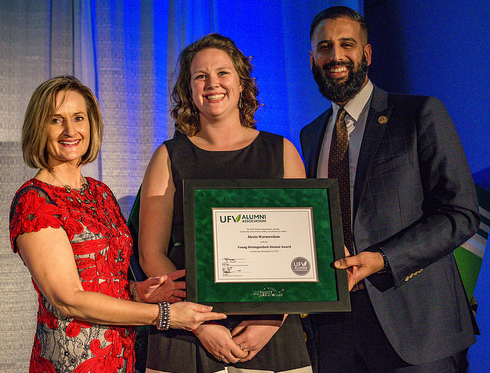 Surprisingly, Alexis’ career choice surprisingly wasn’t immediately obvious, despite her family’s rich background in floriculture. Grandfather Peter emigrated from the Netherlands and settled in the Fraser Valley in 1950, growing daffodils, gladiolas, peonies, and tulips. But instead of studying agriculture, Alexis’ path began with UFV’s engineering transfer program. She transferred to SFU, where her co-op experience involved developing software for new windmills before graduating in 2013.

Still, the farm was calling.

An opportunity arose and she returned to her roots, starting her businesses and hiring Ashleigh – a graduate of UFV’s hospitality event planning program.

“I enjoy a challenge and thought it was a great opportunity, it would be silly to pass up. I also enjoy sharing agriculture with the general public who are typically not exposed to farms,” Alexis explains.

While her current career isn’t directly linked to her education, Alexis says her training at UFV still has enormous value.

“I really enjoyed my UFV experience and always recommend UFV to other people, especially because of the smaller classrooms and one-on-one connection with instructors,” she says.

“I know UFV definitely helped prepare me for what I’m doing now. It’s a great learning space for all disciplines.”