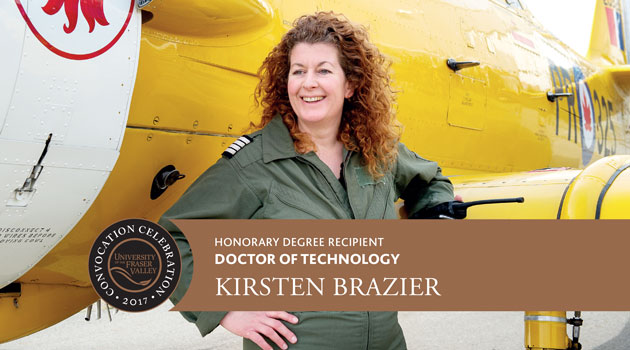 Kirsten Brazier loves working in aviation. And her enthusiasm for sharing this career path, and other STEM-based fields, with females of all ages, has earned her an honorary doctorate from the University of the Fraser Valley.

Brazier will receive her honorary Doctor of Technology degree at UFV’s morning convocation ceremony on Tues, June 6 at 9:30 am at the Abbotsford Centre. The public is welcome to attend.

“One of my professors once told that me you spend 80 percent of your life invested in your career, so you better pick something you enjoy doing if you want to enjoy your life,” Brazier recalls.

She took his advice and became a licensed airplane and helicopter pilot, and has spent most of her career being one of the few women in an industry dominated by men.

She set out to change that through The Sky’s No Limit — Girls Fly Too! This annual event, founded by Brazier, employs a unique hands-on approach to inspire the missing female demographic in aviation, aerospace, the marine industry, and the defence sector.  Since 2012 more than 45,300 participants have been introduced to new career possibilities and 7,217 females of all ages have experienced the magic of first flight. The events are always completely free to prevent barriers to participation, thanks to the support of industry and community partners.

Brazier works with industry, military, and education sector partners to present the event, and has even brought in female astronauts as guests.

“Free flights draw the girls and their parents to the events. Once they land and see all the hands-on displays they realize all the other opportunities in the field. They’re really keen to chat with an astronaut, try riveting, and see engines up close.”

Now, as president and founder of the federally incorporated Achieve Anything Foundation, Brazier is working to develop and implement year-round projects and programs of lasting value geared to inspiring female future leaders in STEM (science, technology, engineering and math), and related fields.

Brazier is a pilot and aviation professional with 24 years of experience, including flight operations, business management, aviation consulting, mentoring, and outreach. In addition to flying all over Canada (and beyond) she has flown for several charter air service companies, as well as been a business partner in her own start-up airline and maintenance company.

Her own route to an aviation career was not a direct one.

“I left home at 15 and worked various jobs. Eventually I decided I needed education after all and started courses at a local college.”

She eventually followed her passion and pursued a private pilot’s licence.

“Then one weekend I flew some friends over to Tofino on a pleasure trip and it was so awesome sharing that experience with them that I decided that this is what I wanted to do for my career.”

She earned her fixed-wing commercial licence with multi-engine rating and set out for Saskatchewan, where she found her first flying job on floats. This led to a career spanning more than two decades, and covering most of Canada west of Quebec, with stints in the United States and the Caribbean. Along the way, she earned her Canadian and American airline transport licences for both airplanes and helicopters.

She was usually the only woman in the crew, and saw very few females working in other aspects of the industry.

In 2012, Brazier organized her first The Sky’s No Limit — Girls Fly Too! event in Yellowknife, NT. Her goal was to introduce 500 females to the magic of flight but she was surprised by how difficult it was to entice them to the airport. Despite this, 1,500 people attended and 421 females flew for the first time.

In 2013, the event grew to 3,000 participants and 681 females of all ages were introduced to flight. By then she could see the potential for growth and moved the event south to BC, first to Langley and then to Abbotsford.   The event has grown to over 15,000 participants and includes international support from the US Air Force and the US Navy.

Now that the event is an annual success, Brazier is expanding the concept to include other science and technological career paths. She decided three years ago that promoting this idea was a full-time job, which is why she founded the Achieve Anything Foundation.

“My goal is to now carry on this hands-on approach to educate girls about career potential in STEM. I want this movement to grow until it is no longer needed. My current role is not just a job but an opportunity to improve female participation in the industry by alerting them to what’s out there. We can’t expect them to imagine a career that they have had no contact with. We need to get them flying, holding tools in their hand, and engaging with real-live role models.”

Brazier is delighted that UFV is recognizing her advocacy work with an honorary degree.

“I’m super excited that I’m being rewarded with this very tangible recognition, and the credibility it brings. It’s great to see a university making the statement that this work — exposing females to opportunities in aviation and other STEM-related fields — is important.”