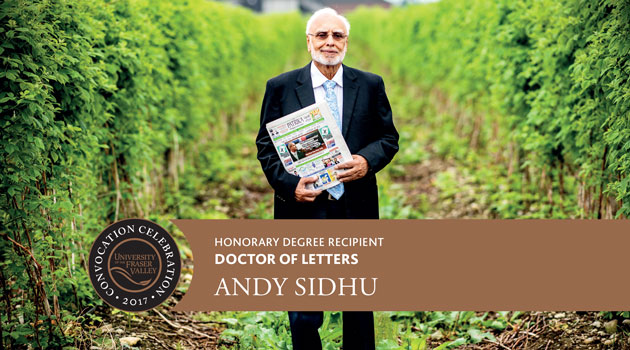 The son of a hardworking Malaysian bus driver, Andy Sidhu knows the value of timely connections.

“Any immigrant moving to any country has teething problems when you first arrive. You only have so much money, and when it runs short you start to worry, and that’s what happened to me,” Sidhu says.

An accountant by trade, Sidhu found himself dealing with cows instead of calculators not long after coming to Canada in 1974. As a dairy farm labourer, there was no shortage of work — or opportunities. Still, he had a hard time convincing the folks back home that he’d taken up a new vocation.

“When I wrote back to my father to say I started working on a dairy farm, he told my mother I was lying. He said: ‘he never moved a chair in the house and how do you expect him to work as a labourer?’. But necessity makes you do things that you never dreamt.”

From the farm, Sidhu moved into bookkeeping with the newly created Canada Farm Labour Pool, eventually rising to assistant manager before massive layoffs swept through the federal program in 1995. Throughout his 21 years there, the bilingual Sidhu had become an unofficial ambassador, bridging gaps in culture and language between local businesses and people emigrating from the Punjab.

He had an idea.

“I told my wife, Pritam, maybe we should start a newspaper, and of course I’ll never forget her saying ‘what do you know about newspapers?’

“Truly, I knew nothing.” 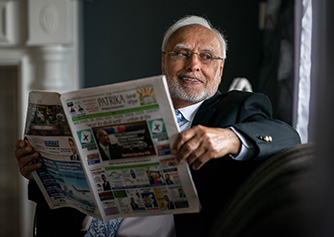 Still, Sidhu set to work, hiring a man he knew with newspaper experience. The Punjabi Patrika was born.

Sidhu says working in the community with the Labour Pool provided insight into the thoughts of Caucasians towards South Asian people.

“Basically what I found was they were not able to understand the influx of people who were coming here who were darker than them, who had turbans and wore long beards, and the ladies wore dresses like pajamas. So I felt that my paper could help to bridge the communities. That was our mission.”

Still standing as B.C.’s first multi-language newspaper, the Patrika prints 15,000 copies every Friday in English and Punjabi. Ranging between 68-72 pages, its news and circulation focuses on Abbotsford and Mission, but 2,000 copies are sent to Surrey, and another 100 to Kelowna. A mix of local news, columns, and real estate listings, the paper also includes two pages of updates from the Punjab region.

Sidhu recently handed the office keys over to his son, Dave. His other son, Ronnie, is finishing a master’s degree in public health at Washington University.

Even with Dave at the wheel, Andy is busier than ever. He has decades of volunteer work behind him, and even at the age of 77, seemingly decades more ahead.

In addition to financial donations to local health care and recreational initiatives, Sidhu has volunteered with more than a dozen groups, including the UFV South Asian Studies Institute, the Abbotsford Foundation, Indo-Canadian Business Association, Abbotsford Community Services, and Abbotsford Hospice.

He was a Queens Diamond Jubilee Award winner in 2012 and regularly listed among the Abbotsford News’ 100 Most Influential People in Abbotsford, in addition to being Canadian Diabetes Association Regional Volunteer of the Year and receiving the Fraser Valley Cultural Diversity Award.

“My 43 years in Canada have been very good. I’ve been through a lot, seen a lot, met some wonderful people,” Sidhu says.

“It’s been an amazing life for me.”