Mark Evered may be retiring from the presidency of UFV, but the legacy of himself and his wife Maureen’s will be commemorated in a very prominent way.

At a thank-you reception on April 18, UFV Student Union Society President Suhki Brar announced that the Great Hall of the Student Union Building will now be known as Evered Hall.

The SUS showed a video during the ceremony in which students recounted the different ways that Mark and Maureen Evered had supported them over the years, from inviting them to Friesen House, to offering a hug when needed, to being regulars at UFV Cascades games and many other campus events.

“President Evered has been a key supporter many initiatives important to students, including the development of the Student Union Building, the UFV Campus Connector Shuttle, the UPass, and health-related projects,” said Brar. “We recognize that both Mark and Maureen Evered have been essential partners in moving student initiatives forward on this campus. It seemed fitting to honor and celebrate them with the naming of Evered Hall.”

Mark and Maureen were both shed a few joyful tears at the surprise announcement during the goodbye reception. He noted that students are the heart of UFV, and said that he and Maureen have derived great pleasure from getting to know so many of them and from helping them prepare to be leaders and contributors to their communities in the Fraser Valley and beyond. 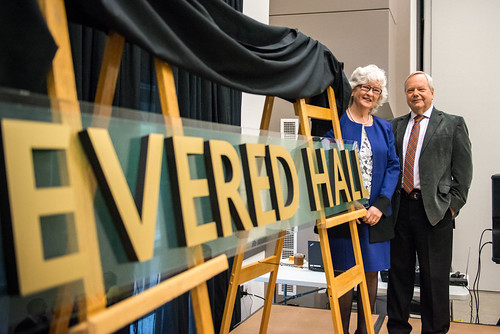