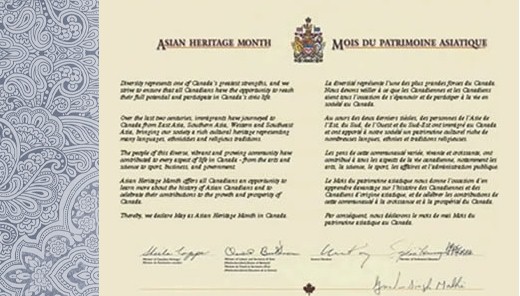 My birth in India determined my continental affiliation—Asian. Playing Name-Place-Animal-Thing as children, my siblings and friends always vied for the alphabet “A” to quickly claim Asia as a “place” we felt that we belonged to; of course, our schooling right from grade one (possibly earlier too) situated us geographically and cartographically—in India, South Asia (the term sub-continent was still prevalent), Asia, and world. Each time I saw it in my grandfather’s Phillip’s Atlas, Asia appeared as an enormous landmass. The colour of the map, however, did not reveal the multitude of cultures that I would learn about or live with in future. There was a sense of pride—or so I think as I revisit those days—that we were part of such a large continent.

Fast forward two decades. Jet travel made it possible to move from one continent to another, establishing a new home while maintaining contact with the old and, at times, having multiple homes across the globe. When I migrated to Canada in 1993, I was surprised to see that for many Canadians the category “Asian” did not include people like myself who had migrated from South Asia or West Asia (or the Middle-East). I must say that my childhood pride received more than a bruising to discover that I was not considered a part of the large continent that I belonged to and was quick to identify with during years of play and learning.

But Canada has developed ways to acknowledge the diversity of Asian cultural nuances and their connections with Canada.

For example, there’s Asian Heritage Month. On May 31, the last day of this year’s commemorative month, I attempted to select a few strands from an assembly of thoughts about Asia and the contribution its people continue to make to Canada as generations of settlers, new immigrants, and temporary workers. Here they are for you now.

Asian Heritage Month recognizes and celebrates the wonderful diversity of culture—languages, ethnicities, religions, traditions, food, and costume, for example. The recognition and celebration of Asian heritage in Canada started in the 1990s before being formalized by the Government of Canada. According to Canada Heritage: 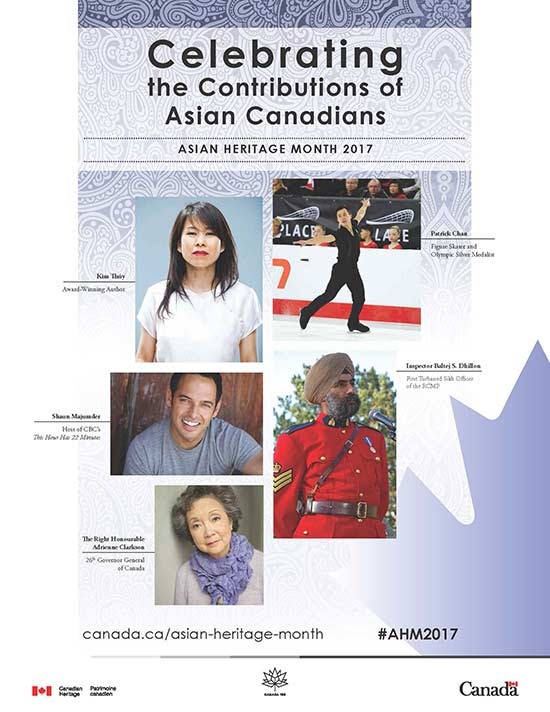 Various events and activities are organized throughout May in a number of Canadian cities to highlight the contribution of Asian Canadians who have carved a niche for themselves in industry, private sector, civic bodies, federal and provincial politics, and arts and culture. Attention to history of migration—discriminatory practices and racist attitudes that manifested in the form of Head Tax or the Komagata Maru incident—is an important aspect of any focus on Asian heritage in Canada. The history of the nation building icon—the railway—that connected Canada from coast-to-coast is incomplete without paying due homage to Chinese labourers many of whom sacrificed their lives to build it. During the recent provincial elections as I lined up to cast my vote, I remembered those who fought for several years to eventually win in 1947 the right to vote for South Asians. Commemorations of various battles in the two world wars and others since draw attention to soldiers of Asian descent who fought for Canada while fighting racism and discrimination. The contributions are many—small and large; and those who contributed include the unknown and the famous, all of whom I respectfully acknowledge and thank as an Asian Canadian.

It would be remiss of me to not mention Asian Canadians and their contribution to Canadian arts and culture. After all I belong to the Department of English in College of Arts at UFV. A colleague told me recently that he is a voracious reader of literature from around the world through which he is able to explore diverse characters, perspectives, themes, and issues—many of which are universal. Taking a cue from him, I am offering a list of highly recommended readings and film viewings out of a large corpus of creative works. The list is by no means exhaustive or presented in any particular order; it represents the calibre of work that warrants attention of readers and viewers. Some of the names may indicate the ancestral connections to specific countries; others will require some work on your part:

Novels & Poetry: Joy Kogawa’s Obasan, Hiromi Gotto’s The Kappa Child, Lynne Kutsukake’s The Translation of Love, and Mariko Takami’s Skim ; Roy Miki’s Saving Face: Poetry Selected 1976-88, Surrender, and There; Fred Wah’s Diamond Grill and is a door, Wayson Choy’s The Jade Peony, Jen Sookfong Lee’s The Better Mother and Madeleine Thien’s Do Not Say We have Nothing; Ann K Choi’s Kay’s Lucky Coin Variety; Vincent Lam Headmaster’s Wager and Kim Thuy’s Ru; Michael Ondaatje’s The English Patient, In the Skin of Lion, and Anil’s Ghost, Shyam Selvadurai’s Funny Boy  and The Hungry Ghosts, M.G. Vassanji’s The Gunny Sack, The Book of Secrets, and The Magic of Saida, Rohintan Mistry’s A Fine Balance and Such a Long Journey, Anita Rau Badami’s The Hero’s Walk and Can You Hear the Nightbird Call?, and Shauna Singh Baldwin’s What the Body Remembers; and Rawi Hage’s De Nero’s Game

You don’t need to read these works only during Asian Heritage Month. Grab one from your bookshelf or the UFV/your local library, go online or to a brick-&-mortar bookstore, or borrow from a friend or a colleague anytime to immerse yourself in the wonderful world of words.