Ever have someone ask you “why do you study English?”

Students tell us that they face this question occasionally – from friends, family members, or fellow students.

Many of these same students also have great answers to this question:

– that studying literature and writing is intellectually stimulating and personally enriching; that it helps them develop key critical thinking skills;

– that they become better readers, writers and communicators;

– that English teaches them how to interpret the world around them and how to impact that world with their voice and stories;

– that it helps them gain a deeper understanding of language, culture, history, narrative, imagination and so much more.

Professors get asked this question, too. And, since we’ve devoted our professional lives to the discipline, we are passionate advocates for English as a valuable field of study.

This gave us at the Social Media Committee an idea: what if we gathered together the many great and varied reasons UFV folks have for why people should study English, and shared them?

With that thought in mind, over the last few weeks, the Social Media Committee has started to film testimonials from current students, former students, and faculty members as part of a video series called “Why Study English?” 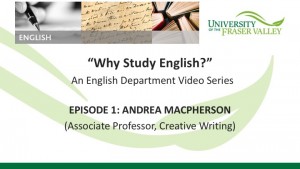 We are excited to begin to share this series of short interviews on our department web site and on our other online communities: here on our blog, on our Facebook page, and on Twitter @UFVEnglish.

How the series will work: Each video will feature a member of the UFV English community tackling the question of “Why Study English?” but also other questions that tell us a bit about themselves – their interests, their current projects, their future plans, their favourite books, their responses to absurd hypothetical scenarios.

Our hope is that, not only will these videos help spread the word about the great opportunities, experiences, and potential pathways made available to those who study English, but we will also learn a little bit about the people who make up the English studies community here at UFV.

For example, did you know that studying English at UFV could take you to Poland? Or that one of our faculty members started out as an aspiring chemist?

Our first interview is ready now, so we wanted to release it as a “teaser” for the series as a whole, which will start over the Summer, and then really get rolling in Fall 2016. 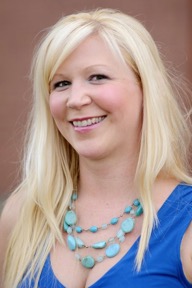 Without further ado, here is our first interview with … Andrea MacPherson!

Professor MacPherson primarily teaches Creative Writing. She is also a faculty advisor for The Louden Singletree, UFV’s award-winning literary and visual arts magazine. And Andrea is an accomplished novelist and poet in her own right.

Why does she think people should study English? The short answer, she says, is “because it makes you a better person!”

She adds that she has “never had a student who has regretted becoming an English major, minor, or becoming part of the English department.”

Andrea also tells what she would name our English department softball team (if we had one).

Special thanks go to Christina Carne and Shana Smith, two UFV work-study students who helped with every step of this series, from envisioning the project and its aims, to coming up with the questions for our interviewees, to filming and editing the interviews. Great work!

One Response to “Why Study English?” a new video series from the English department: Episode 1 – Andrea MacPherson