You may have seen his byline in the Vancouver Sun, where he’s been a reporter since 2010, or be familiar with his hilarious twitter presence (@HarrisonMooney) – but did you know that Harrison Mooney is a 2007 graduate of the UFV English department? He is currently working on a memoir, The Boy Who Saw What Wasn’t There (HarperCollins, 2022) and recently sat down with us (virtually) for an interview about his book project, his career in journalism, his thoughts on anti-Black racism, his advice on writing, and his fondest memories of UFV. 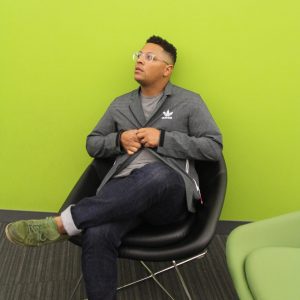 Can you tell us a bit about how the book project came about?

I’ve wanted to write this book for a long time, and I just couldn’t figure out how. The story was too personal, I wasn’t quite sure I knew how to tell it or even if I fully understood it, and too many people were still alive. So there were a lot of failed beginnings. But I had this creative writing teacher who once said that your memories ripen into stories over time and fall from the tree one day, ready, and I thought that was, like, the dumbest — right up until it happened to me. Sometime last year, this project fell from the tree and I knew it was time.

So I asked a colleague about getting agented and they introduced me to their agent, then I pitched the idea, and then I had an agent. When I finished the book proposal in March, she sent it out right away, and we got an offer from HarperCollins soon after that. So in one sense, it all happened pretty quickly. But this really has been a lifelong pursuit.

I heard you on a recent podcast describe the arc of your own story as being a journey “from white cult to Black consciousness.” Can you talk a bit about that process? What contributed to that awakening consciousness?

My birthmother was a Ghanaian immigrant, and then a teen mom in the B.C. foster system, and I was adopted by a white, fundamentalist Christian family as a baby. I grew up basically isolated from any other Black people at all, and cocooned in zealotry, paranoia and whiteness, so I didn’t have anybody helping me understand or navigate a community, let alone a world steeped in anti-blackness and systemic racism. And there was no one to help me see how complex and violent my own family’s opinions of me really were, or keep me from internalizing those opinions.

So it was a long road to Black consciousness. What contributed to the awakening? Well, that’s the 80,000 word story. No one, major incident or awful epiphany — just a lifetime of major incidents and awful epiphanies that chipped away at me and inevitably carved out a black identity, whether I liked it or not. Plus I read some Baldwin in college. That’s the shortcut.

Anyway. The breakthrough was a face-to-face meeting with my birthmother in my twenties, and that’s the end of the book, but of course it’s never over, not for me, and not for anyone else. One must always be reckoning with the anti-blackness at the foundation of this society, and that reckoning is the crucial work in all of our lives. My hope is to convey that with this book, and to make it as deeply personal for every reader as it is for me.

How are you finding the work of writing a book, as compared to the writing you usually do for the Sun?

This is the writing I’ve always wanted to do, so I’m finding it much more fulfilling.

It’s still a huge undertaking, though. At the Sun, my articles rarely go past 1000 words and once they’re published, I move on to something else. But this is a big, fat book, and it’s hard to see to the end of such a big project. I don’t typically do well with stuff that requires a long-term vision — I have ADHD — so I’m employing a bunch of new strategies. I eat a lot Skittles now, for instance, and I drink a lot of tea. Also I take my prescribed medication. That’s been the most helpful.

The other issue with memoir writing is it makes you sad. The news can make you sad, but you try not to think about it. With this, I’m actively trying to think about it, and it runs counter to every coping mechanism I have. It’s a weird kind of therapy that forces me to go back in time and have all sorts of yucky feelings. I was trying to recall a panic attack I had when I was ten so I could describe it, and then I just had it again. Great for the project, but it was not a fun flashback.

Actor and comedy writer Ben Schwartz once tweeted that “thirty percent of writing is complaining about writing.” Would you agree?

Oh definitely. It’s just so f—ing difficult. Writing a book is a lot like giving birth — which is to say it’s nothing like giving birth, but your mind tells you otherwise, and in that way it’s quite trying. Some days you can sit at the computer for hours and wind up with fewer words than you started. How can you not complain about nonsense like that? Ridiculous. I hate writing with such a burning passion that it’s the only thing I ever learned how to do well.

What is the best advice you’ve been given about writing? And/or, what advice about writing would you share with students?

Baldwin said: “When you’re writing, you’re trying to find out something you do not know.” I love that, and it feels too true to say only once, so let me put it another way: you never really know what you’re writing until you’re finished.

How did you get your start in journalism?

I started a hockey blog! I was an original co-founder of Pass it to Bulis, now the official Canucks blog of the Vancouver Courier. At first it was just a fun little side project on Blogspot during my Master’s, but people enjoyed it and our audience grew pretty quickly. After a year, the Vancouver Sun approached us about migrating to their server, and once I had my foot in the door, I just kept putting my foot in the next door. I didn’t go to journalism school so I often feel like an imposter, but I’ve been pretending to belong my whole life, so it’s fine — plus it’s been nearly a decade in journalism, which is long enough to know that everyone’s an imposter and no one is actually the thing for real.

What’s the best thing about your job?

Until a few months ago, it was the mere fact that I’m paid to write for a living. That’s all I’ve ever wanted out of a job, even if I’d prefer to pick my own topics. But these days, the best thing about journalism is that you can do it from home. A lot of my friends lost their livelihoods when the economy shut down back in March, and I felt very fortunate when my boss called on March 16, not to lay me off but to make sure I came in to get my computer right away. The only downside was my wife was in labour when the phone rang (and she was still in labour when I got back), so now we have a newborn baby and a two-year-old and my home office is very loud. But I can’t complain. The best thing about my job is that I still have one.

What would you change about it? And/or what is the hardest thing about your job?

The whiteness. That’s my answer to both questions. It’s the biggest problem with Canadian journalism, in general. For most of my life, the white perspective was held up as the only perspective that mattered, and while that’s finally changing, it’s being slow-walked by the editorial class of our industry. As a result, our product isn’t representative, our stories are often missing key insight, and our staff is not equipped, frankly, to deal with the most pressing issues of the current moment. It also puts a great deal of pressure on me and other Black journalists to make sure that we get things right, and we’re not experts on blackness writ large — just our own. I don’t want to be the last line of defence for systemic racism in our pages. I can’t think of another Black journalist in Canada who does either, and I know them all.

Any advice for current English students who are thinking of a career in journalism?

Protect your byline. These newspapers still want you to think their masthead is the brand, and they’re wrong. You’re the brand. You build your reputation with the words that you write, and what you tweet, and how you engage with the online community. The paper benefits from your public-facing, personal and professional development. They have all the money, but you have all the power. Don’t give it away for nothing. Don’t put your byline on assignments that make you uncomfortable. Don’t write anything you don’t agree with. Never let them define you.

Favourite author and/or book (either recent or all-time)?

It’s James Baldwin, and it’s not close. His novels are beautifully written and very powerful. But it’s the essays that really resonate with me. I don’t often reread books — there’s just so many other books! — but I return to Baldwin’s Notes of a Native Son about once a month, and it’s the only book I consistently take with me when I travel.

Any favourite memories of your time at UFV?

Hilary Turner is my favourite memory of my time at UFV. One time I was asleep in her class and she still picked me to read an excerpt. She just tapped me on the shoulder and said in that deep and dignified voice of hers, “Harrison, you have a lusty baritone. Wake up and read this.”