My choice for poetry month was partly inspired, I will admit, by the runaway hit TV show Breaking Bad, whose best episode is titled “Ozymandias.” Watching the show’s final season, which tracks Walter White’s meth empire as it inevitably crumbles into the New Mexico desert, brought Shelley’s sonnet back to the forefront of my mind.

As a specialist in eighteenth-century literature, I sometimes find myself at odds with the rock-star-like British Romantic poets of the early 1800s, because they make it hard for today’s students to find Alexander Pope interesting (he is, I swear!). But a poem like “Ozymandias” reminds me that resenting the Romantics is a bit like hating the New York Yankees: part of the resistance is driven by how consistently successful they are. 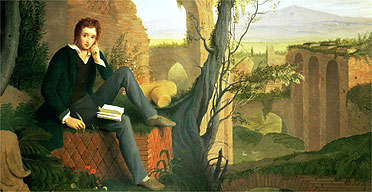 Shelley’s sonnet about the futile hubris of tyranny knocks it out of the park, and one of the things I love is that it manages to be complex (both structurally and thematically) while still remaining immediately impactful. At its centre is the striking central image of a colossal broken statue in the middle of an empty desert, bearing an ironic inscription: ‘My name is Ozymandias, king of kings: / Look on my works, ye Mighty, and despair!’ Students often come away with a clear sense of Shelley’s use of the exotic, foreign past of Egypt to make a statement about politics in his own time and place.

However, this striking allegorical image is also filtered through multiple voices and perspectives, which layer the political message with reflections on the potential for art to critique power. Ozymandias may have been a mighty tyrant in his day, but his empire did not last. However, the ancient sculptor’s subtle-yet-critical interpretation of the tyrant’s “passions” through his “wrinkled lip” and “sneer of cold command” lives on in the “shattered visage.”

In the end, art wins and survives, while political tyranny shatters and dies. I don’t know if this is actually true, but I like to think it might be.

I met a traveller from an antique land

Who said: “Two vast and trunkless legs of stone

Stand in the desert. Near them on the sand,

Half sunk, a shattered visage lies, whose frown

And wrinkled lip and sneer of cold command

Tell that its sculptor well those passions read

Which yet survive, stamped on these lifeless things,

The hand that mocked them and the heart that fed.

And on the pedestal these words appear:

`My name is Ozymandias, King of Kings:

Look on my works, ye mighty, and despair!’

Nothing beside remains. Round the decay

Of that colossal wreck, boundless and bare,

The lone and level sands stretch far away”.

Graduating Student Writers on their Way Greatness
A Swan Song Poetry Month Pick from the Writer-in-Residence: “I Shout Love”