In case you hadn’t realized it yet, UFV is home to some amazing student writers. Many of them produce insightful local commentary on a grueling weekly schedule in our student newspaper, The Cascade. 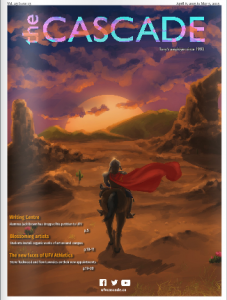 While we’ll miss their compelling stories, we celebrate their inevitable journey into greatness as they join the ranks of so many famous North American authors who got their start as writers and editors of student-run newspapers and publications, including:

We can’t predict what great things our alumni will do–we simply know they’re on their way to setting the literary world alight.

And we’re equally confident that their replacements on the new Cascade editorial team will step up to carry on the  impressive work.

In the meantime, all the best to our departing greats–we wish you well in your future success!