Students principally   spoke to the questions of addressing misconceptions of what indigenization meant: they felt that a separate gathering space was needed where they could feel at home and culturally safe, feeling they could be themselves and not be judged. Also addressed were issues of structural discrimination typical of a Eurocentric post-secondary institution: mentioned as examples were traditional Eurocentric classrooms such as desks arranged in rows, and having final exams. It was felt that more indigenous teaching and evaluation methods should be considered, and that Canada was not innocent when it came to racial discrimination and social injustice. Expressed also was the opinion that students should be embracing the notions of self- determination, self- control, setting goals and taking control of the process of indigenizing. At the same time, students cautioned that institutions should guard against the mistakes made when attempting to indigenize the criminal justice system of the child protection system:  once that process was in place, those systems were worse off, and that institutions would do well to examine those mistakes and exercise caution moving forward. It was felt that a necessary part of indigenization also included educating more professionals such as doctors and lawyers so that they would understand the culture and history, and that consequently their unique worldview would be an aid in indigenization.

Questions students had around indigenization were what the definition of indigenization was and what  the guidelines were; what were the key questions they needed to be asking, and how could they indigenize strategically? How could they decolonize by dismantling the structural discrimination that exists in the institution? A key question was, ”Who gets to decide the definition of indigenizing?”

It was mentioned that it was difficult to make it through a system that talks about inclusion but that is backed by an infrastructure and policy that does not allow for inclusion: these issues are particularly extant within  graduate studies, such as within Masters and PhD dissertation processes.  Very often the students find themselves as the lone aboriginal students in a class where comments and misconceptions are shared; they are the only ones who can address these misconceptions, but sometimes they don’t have the energy to do it.

Necessary to the process of indigenization are the inclusion of elders, and decolonization at all levels: individual, family, community and institutional. One student suggested that they needed to both indigenize and assimilate: it would be an uncomfortable process and needed to be done “with mind, body, and emotions” (Breakout 1, Group 4, Students), bringing love, compassion, and a connectedness to everything including natural science.  Students expressed a desire to see more networking with other disciplines and knowledge bases, such as architecture and geography.

Recommendations students made were to make the “systems” less confusing for students: to include indigenous programming (with an indigenous worldview, not a Eurocentric one), to include aboriginal historical teachings, to indigenize faculty and staff worldviews, for university students to mentor high school students, for students to complete their schooling to make it easier for those coming after them, and to educate non-aboriginals and encourage them to engage in conversation about aboriginal topics. It was felt that ignorance was not a good excuse; the onus was on non-aboriginals also to take some initiative, go out and learn. Unintentional racism was harder to deal with than blatant racism. 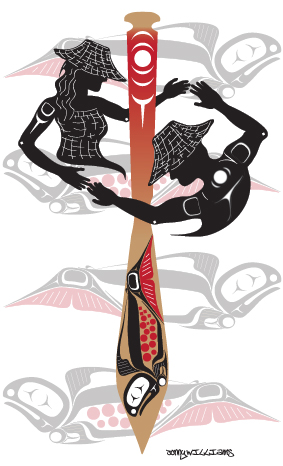