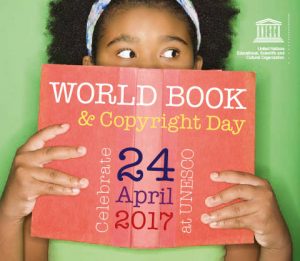 April 23rd is World Book Day (or World Book and Copyright Day) as recognized by the United Nations, a date which offers an opportunity to reflect on the personal, cultural, historical, and global significance of books.

To commemorate this day, and as part of our “Every Day English” series, I thought I would discuss one of my long-standing research interests.

However, I also have a more narrow interest: I like to look at what might be called “books about books.”

What are these?: These are literary works that are acutely aware of their own status as books.

This might still sound odd or abstract, so an example might clear up what kind of text I am talking about: In Kurt Vonnegut’s 1973 novel Breakfast of Champions, Vonnegut shows up in his own novel, and pays a visit to one of his recurring, long-suffering characters, Kilgore Trout. He tells the perennially unhappy Mr. Trout that he is, in fact, a fictional character – that Vonnegut is his author, and he is not a real person. Then Vonnegut tells Mr. Trout that he will stop tormenting the miserable man and give him free will.

When I first read Breakfast of Champions, many years ago as a high school student, this scene was a revelation. In later years, I continued to think about what Vonnegut was up to and learned that there was a critical term for it: “metafiction” – which refers essentially to fiction about fiction, to stories about the nature of storytelling, to books that are (in some way) self-consciously interrogating their own bookness. I also learned that Vonnegut’s seemingly (to me) radical innovation was not entirely new.

Which brings me to the book (about books) I really want to talk about today: It is a very strange eighteenth-century novel that I love to tell my students about, but hate to teach called Tristram Shandy, by Laurence Sterne.

Here is a very loose overview:

Tristram Shandy sets out to write a full and complete history of his life. But there’s one big hitch; in an effort to be encyclopedic, he finds he cannot leave any detail out. In an attempt to surpass previous autobiographies, which usually begin predictably with the author’s birth, Tristram decides to start his book even earlier with the moment of his conception!

From there Tristram gets caught up in a variety of digressions about his father, his uncle Toby, obstetrics, naming, noses, and many other incidental matters, to the point where Tristram does not even get to the moment of his birth until the fourth volume of the novel. He then notes it has taken him over a year of writing to get through a single day of his life, and is forced to reflect on his project: at this rate, if each day of his life takes a year to write about, then he has actually fallen 365 volumes behind on his autobiography!

“The more I write, the more I shall have to write” Tristram notes, in typically Sternean paradoxical style. As his novel progresses, it is actually moving backward, because each new day of writing adds another volume of his life to be written.

One thing I enjoy about Sterne’s Tristram Shandy is that it not only invites its audience to be more self-conscious about the conventions and expectations of different genres of books that we often take for granted – the novel, the history book, the autobiography – but it also forces its readers to be more self-conscious about the material book in their hands. Rather than taking us on a journey of the imagination, Sterne periodically pushes readers out of the narrative to draw attention to the tactile, physical, ink-sodden pages of the book itself.

For example, Tristram follows-up the death of a family friend, Parson Yorick, with a completely black page to reflect his grief. Later, when Uncle Toby’s friend and servant Corporal Trim tries to explain the nature of liberty with a flourish of his cane, the novel traces out the line of the cane’s movement in the air. Tristram pauses to defend his digressions, he includes a sketch of the progress of his plot. And perhaps most famously, Tristram interrupts his narrative to introduce the “motly emblem of his work” a marbled page.

These innovations (and many others) required that Sterne, for all his seeming improvised playfulness, work very closely with his printer to ensure fidelity to his wild visions for this novel. In the first edition of Tristram Shandy, Sterne ensured that each individual “marbled page” was actually hand-dipped in a unique mixture of colors.

Each page is colorfully marbled in a distinct way. Tristram suggests that if you can decipher this page, you will understand the meaning of his book. But, of course, each page for each reader was different, so what does that suggest about the nature of meaning? Or the task of interpretation? Or the impact of mechanical reproduction on art?

What we are left is with is a work that feels both intimate and distant. We feel the weight and touch of the book and its pages, yet also the richness and elusiveness of the words and images they contain. We see the uniqueness of the marbling, but we are also made more aware by its interruption of the mechanical uniformity and order of the printed words which surround it.

The intimacy and elusiveness of books continue to inspire me as I study literature and language, and I am grateful to “books about books” like those of Sterne and Vonnegut (and so many others) for helping me reflect on this as I celebrate World Book Day!

Where Can English Take You? To Ancient Cities Across the World
It’s time for the English Department Grad Gala: Celebrate with nibbles, sips, and your professors