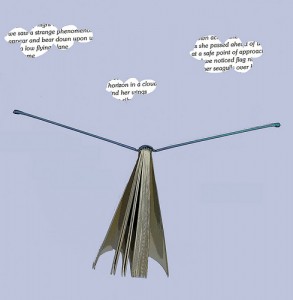 Have you ever received an expectant stare after saying “I’m an English Major,” followed by “what are you going to do with that?” Studying English doesn’t provide people with immediate understanding the way saying “I’m a in the business program” does. Just saying I’ve read more books then I’ve watched TV and have decimated an entire forest with the amount of journals I own isn’t enough of a reason.

Honestly, there’s just something fulfilling being in English classes, whether it’s creative writing or literature, that I don’t experience in other classes–no matter how much I enjoy arguing in philosophy.

There is just a passion that English students seem to share. I can start conversations with anyone in my English classes. We easily get worked into a fever talking about that twisted Kafka piece. We swoon together when three more people understood what we were trying to say in the poems we produced for a Creative Writing workshop. We sigh over finding a deliciously new word like “mellifluous” and just waiting for a reason to use it. I fee truly home in English classes alongside like-minded students who crave having their mind sparked.

Even those who don’t find English all that amazing, or took it just because it was required of them, still find themselves becoming as enraptured as the rest of us. If you’ve taken English classes, then you’ve have experienced literature professors who make the densest and most abstract novels open up and sing to you, or you have been in a creative writing workshop where everyone is bursting with brilliance and you felt like the luckiest person to be sitting with the should-be-published authors who seemed to boost your own creativity.

That’s 150% more satisfaction than sitting in a dental hygienist class that you’re not passionate about and only took because your parents said they made good money.