International Trade Minister Ed Fast met with students and faculty of the University of the Fraser Valley (UFV) India in Chandigarh, India. Included in the photo are Mark Evered, UFV President and Vice-Chancellor; Paul Davidson, President of the Association of Universities and Colleges of Canada; and George Peary, a former mayor of Abbotsford, British Columbia, and a current faculty member at UFV India. UFV, based in Abbotsford, partners with Goswami Ganesh Dutta Sanatan Dharma College, an affiliate of Panjab University, to offer a Canadian Bachelor of Business Administration four-year degree program to Indian students at UFV India.

Minister Fast highlighted the benefits of a Canadian education. The students will be going to study in Canada as part of an option to transfer to UFV in Canada. Also pictured (centre, blue shirt) is Gurneet Singh Anand, who was the first student to benefit from the exchange program to transfer to Canada. 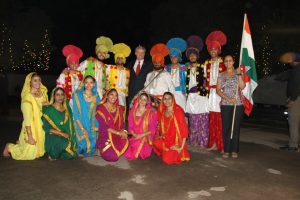 ents from the UFV Chandigarh Campus also had the opportunity to visit Prime Minister Stephen Harper and delight him with their lively Bhangra performances.