Jagat Singh Uppal, or “Jack”  is an example of an individual who came from humble beginnings, and found great success in British Columbia through hard work and dedication. Although Jack Uppal himself was only one year old when he first emigrated to Canada, his family has imbedded pioneer histories in British Columbia as Jack Uppal’s father, Dalip Singh Uppal was part of the first wave of Sikh immigrants to B.C, having come to Canada in 1906. Dalip Singh Uppal was also on the shore committee with other South Asians trying to advocate for the rights of passage for those aboard the Komagata Maru. To date, Jack Uppal is both the Manager and President of his company Goldwood Industries which runs a number of sawmills throughout British Columbia.

In addition to running his company, Jack is also a philanthropist, and a firm believer in giving back to his community. As such, it was with great happiness and honour that the CICS Director, Satwinder Kaur Bains, received the very generous donation of $5,000.00 from Jack. This donation will be used as the first step to expand the various projects which the CICS embarks on in the near future.

The CICS is very grateful to Jack, his donation, and his enduring family legacy for the South Asian community in British Columbia. 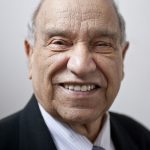