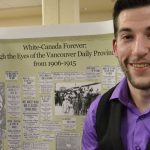 Shea Wind, a history student in the department of history at UFV who was a work-study student for the Centre for Indo Canadian Studies in the Fall semester presented his work at the annual UFV Research Poster day held on March 20th. Shea’s poster was titled:

White-Canada Forever: A Look Through The Eyes of the Vancouver Daily Province Newspaper 1906–1915

Where some posters were filled with graphs and lengthy text explanations, Shea Wind’s posterboard was instead filled with photocopies of newspaper headlines.

“This is pretty much a representation of what I did for the Centre for Indo-Canadian Studies in the fall semester,” Wind said. “I transcribed articles from the Vancouver Daily Province newspaper, focusing on Indo-Canadian immigration to British Columbia and the racism that arose from that.”

These racist undertones are easy to see in the headlines he’s picked out to include as part of the presentation: The headline “Will Arrest Hindu Who Is Alleged To Have Voted” stares at the viewer in all caps, and suspicion seems to be a prevalent theme.

“There are definitely some stories that shock you, that this could happen in the last 100 years. It shows just how brutal British Columbians could be to outsiders during this time period,” Wind noted. “I loved the whole project,” Wind said.

-Some of this content has been taken from http://blogs.ufv.ca/blog/2013/03/ufv-celebrates-student-research-with-poster-day-microlectures-and-awards/