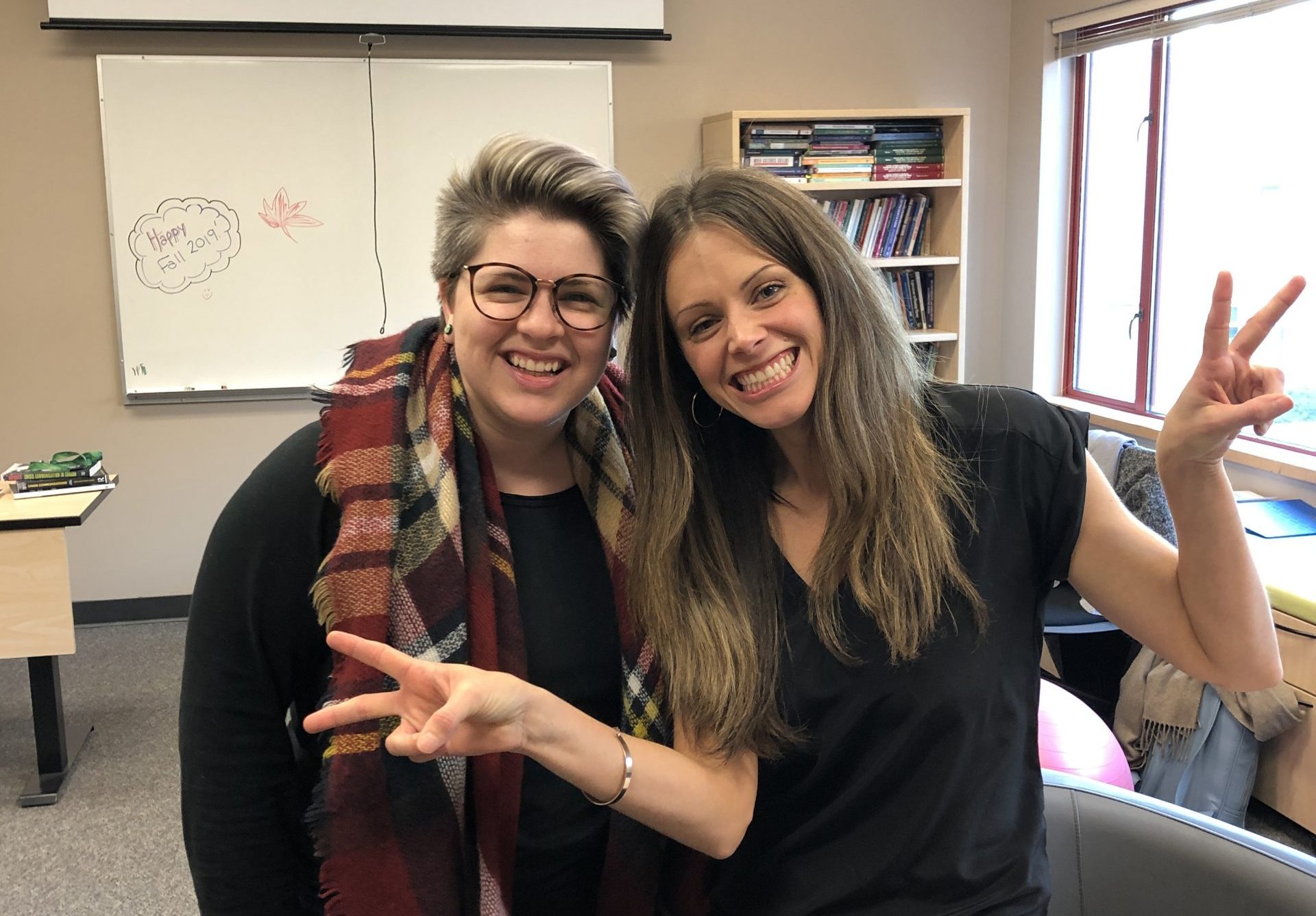 Every year one student from each section of CMNS 235: Public Speaking is nominated by their class for the Rise and Shine Toastmasters award at the end of the semester. These nominees present an acceptance speech as their entry for the award and one exceptional speaker is chosen for the annual $600 prize.

Our most recent winner is Liz Powers, a Bachelor of Arts student with plans to major in psychology before moving on to a Masters in counselling. She’s prepared for it to take longer than the average four-year degree because on top of being a student and server, Liz is a mother of three.

Liz came into every class with a smile and enthusiasm that radiated to everyone around her. Liz’s speeches were relevant to her life, and that of her audience with a healthy dose of humour to draw her listeners in. Most memorably, Liz taught us how to bake cookies for her demonstration speech, and there were plenty of samples to go around.

I caught up with Liz to find out what it took to earn the nomination from her classmates, and the mark Public Speaking has left on her.

Talk to me a bit about your decision to take the class and your journey throughout the term.

So I took the class because I was told there was no final exam. I was just trying to balance out my course load and figure out how to do that with kids and going back to school because I was still really new to the process.

And then the process of learning how to write a speech and then how to execute it was actually far more interesting than I thought it’d be.

What did you think about being nominated, and then about winning?

I was actually very surprised. And then I was grateful and also ungrateful in that I was like “I don’t have time to write another one of these and memorize it,” but I thought, it’s good practice.

Winning the award was a nice confidence booster. It was almost necessary at that stage. When I got the email that I won, it was at a really difficult stage in my life personally with my kids and what not and that was just like a nice moment in what was a really chaotic couple of months.

How’d you plan for the final speech?

One of the memorization techniques that was mentioned in my psychology class was the memory palace. And so I used that to memorize my last speech which was so helpful.

I memorized the speech walking through my house from room to room and each space in my house had a different component of my speech. So when I was giving my speech it was a lot easier because it had a flow to it … I feel it made the process far less nerve wracking.

Do you find you’re more aware of speaking skills in others now?

I am more aware of my hand gestures when I’m talking, because when I started I looked like an aerobics instructor from 1980. Which is really appropriate being the size of my hair typically.

I went to the Tedx Chilliwack, and it was very interesting watching the different speakers because they work with coaches and some of them were so on point and I can tell [they’ve] really dialed this down. I was so impressed — things I probably wouldn’t have noticed before … but now when you understand the number of things that need to go into that. And then the moments where they would forget you could see them stop and close their eyes and look for it in their mind … I know what that moment feels like.

Do you have any tips for the next round of public speaking students? 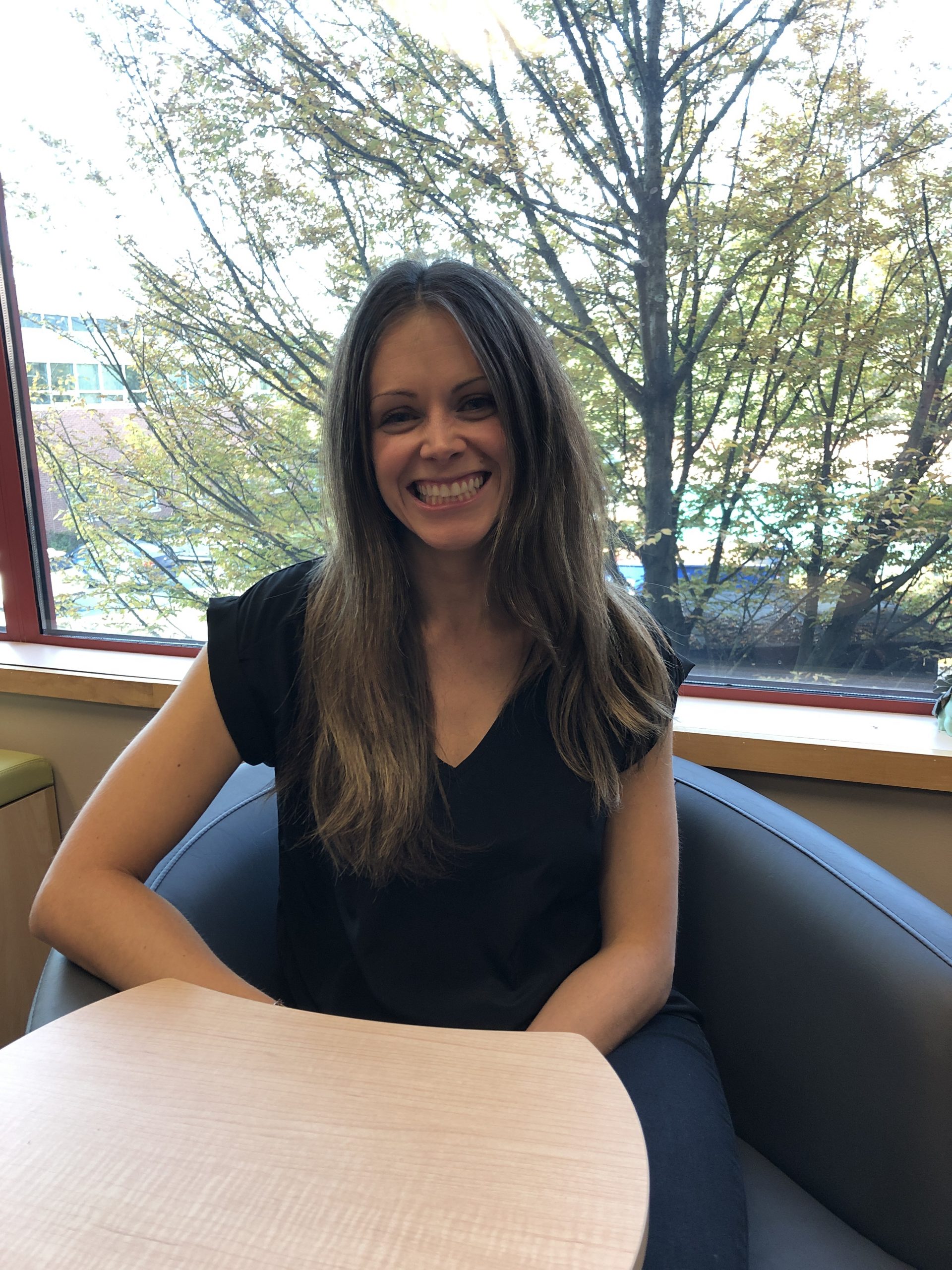 Looking toward the future, Liz dreams of opening a bed and breakfast one day and possibly combining that with her counselling focus into a retreat centre.

I actually just love making people’s beds and cooking them breakfast and telling them about the community and all the cool fun things there are to do. 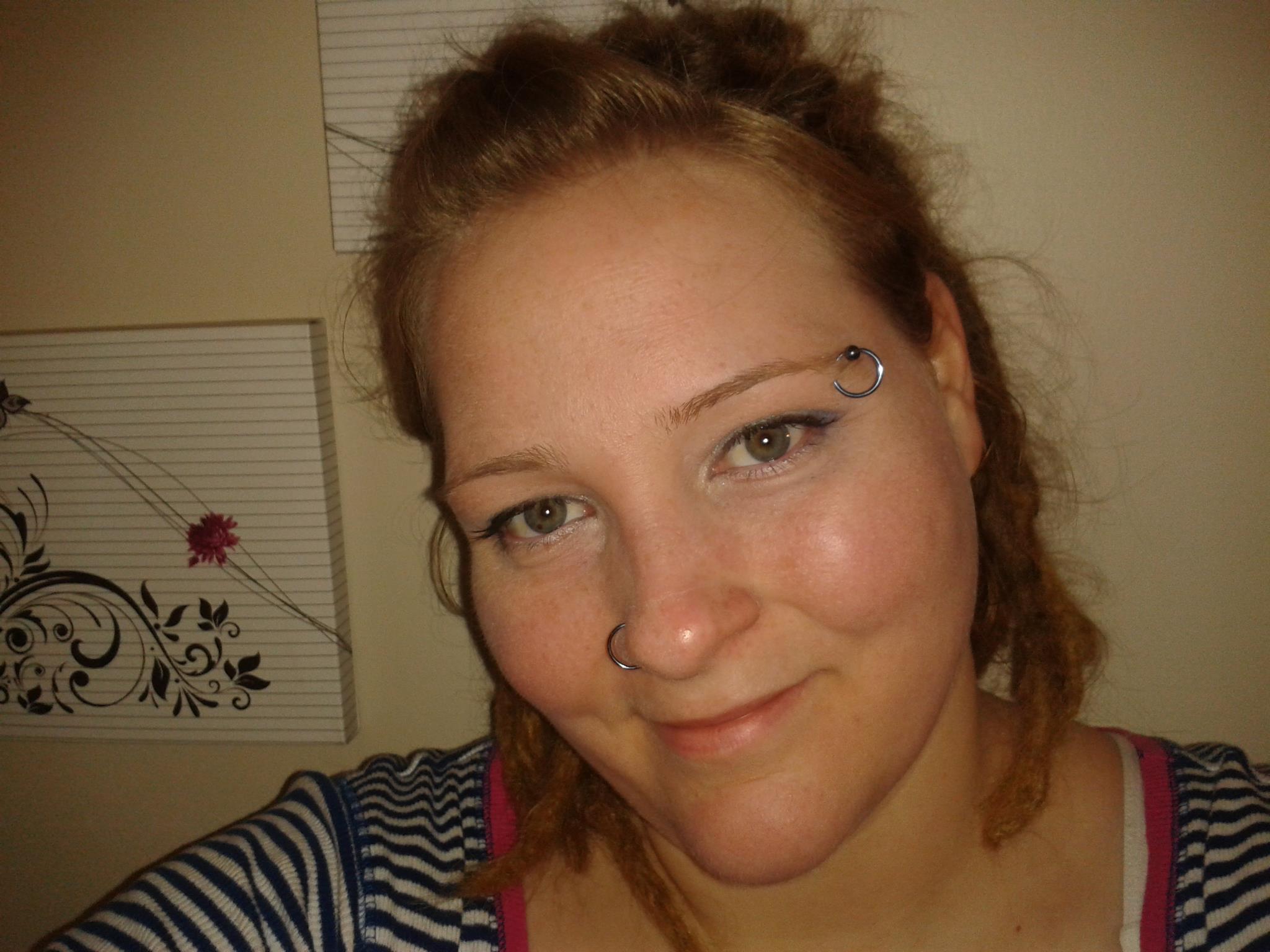 “I was moved by her speech and story and felt she showed a real ability to connect and be responsive to the audience.” This quote from Oral Communications instructor Raymond Welch says a great deal about some of the reasons why Katherine Palmateer’s classmates nominated her for the Rise and Shine Toastmasters’ Annual Achievement Award; and why the selections committee agreed. 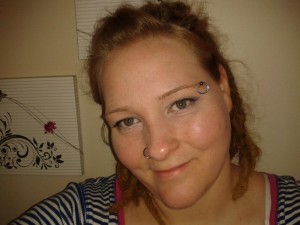 From each May until the next April, the students from every course section of Communications 235 (Oral Communications) take the time to nominate one of their own to represent the best in public speaking practices and skills. Students learn how to capture and keep the attention of their audience, backup their information with credible sources, put arguments together in a way that makes sense, and continually practice speaking clearly and confidently (among many other things).

If you’re interested in perfecting your oral presentation and speech-making skills, you can get ahead of the game by signing up for CMNS 235. The  course is designed using the same proven methods that Toastmasters International has developed and championed since 1924. Even if you don’t have the time to take the course (or end up too far down the waitlist) you still have the opportunity to benefit by joining the Rise and Shine Toastmasters club, which meets on campus at UFV (Fridays from 7:20 to 8:20 am in A225). Katherine did both – and it paid off (literally).

Greetings from New Mexico and the annual conference of the Western States Communication Association. Don’t be too jealous. It has been windy and cold in the high desert, making me happy that I brought my good, Canadian winter coat. On the other hand, the days have been warm inside while meeting colleagues, hearing about teaching practices, and representing the University of the Fraser Valley in two research presentations.

One interesting teaching practice that both faculty and students may enjoy bringing to CMNS 235, Oral Communication, is the idea of using music to segue from speaker to speaker. Patricia O’Keefe from the College of Marin asks each student in her oral communications class to pick a song that they want to use as their theme for the semester. Throughout the semester, various classmates act as the “DJ” who spins the “anthem” as the student walks up and prepares to present. Pat says this practice has had a phenomenal effect in calming nerves and creating community. A song she particularly liked was Andy Grammer’s “Keep Your Head Up.” Leave a comment and let us know what you think about this strategy.

In preparation for this conference I had the pleasure of organizing two panel presentations that ended up garnering lively discussion. The first panel (at 8 o’clock on a Monday morning I might add) was titled, “A roundtable on theory-to-practice: Applied Communication for social change.” Dr. Avinash Thombre (seated in the centre of the above photo) started the session off explaining a project sponsored by the U.S. State Department that brought university students from Pakistan to Little Rock, Arkansas to learn about the democratic process. His role was to help them understand Diffusion of Innovation theory in thinking about how they could use their knowledge once they returned to their homes. This presentation was followed by Christine Hollis (seated right), the Director of a program called “Kids Count” (New Mexico Voices for Children) who spoke about the use of a variety of message design theories that her organization had used to try to persuade state legislators to increase funding for early childhood education. To wrap up the presentations and lead into discussion, I presented a piece on the use of my 9P planning model in the 2011 “Appreciating You and I” community dialogues organized by Abbotsford Community Services. The audience was enthusiastic about the topic; their questions and comments about their own experiences took us right up to the closing minutes and were brought to a close by people trying to get into the room for the next session.

The second panel I had the pleasure of organizing continued the conference theme of social change but concentrated on bringing social change to the post-secondary classroom through the use of culturally responsive teaching practices. I had the pleasure of talking about UFV’s efforts to indigenize, and my own research on reconciling instructional communication theory between the use of Bloom’s three “learning domains” and the four quadrants of the medicine wheel. Elizabeth Root from Oregon State University explained how she created a program to pair her intercultural communication students with international students on campus. Kris Kirschbaum, who experienced her own culture shock in taking a faculty position in North Carolina, talked about similar issues of working with students who had very little experience outside of their own communities and helping them to understand cultural differences and similarities. The fourth speaker, Willow Anderson, reinforced the Canadian presence on the panel. She traveled all the way from Newfoundland to talk about struggles in making sure that as instructors of oral communications we don’t focus exclusively on Aristotelian traditions of public speaking theory. This topic led to an especially lively discussion about alternative ways of configuring assignments and including choices for presentation rubrics. I am definitely going to bring some of these ideas back to discuss with my colleagues at UFV.

See you all soon!