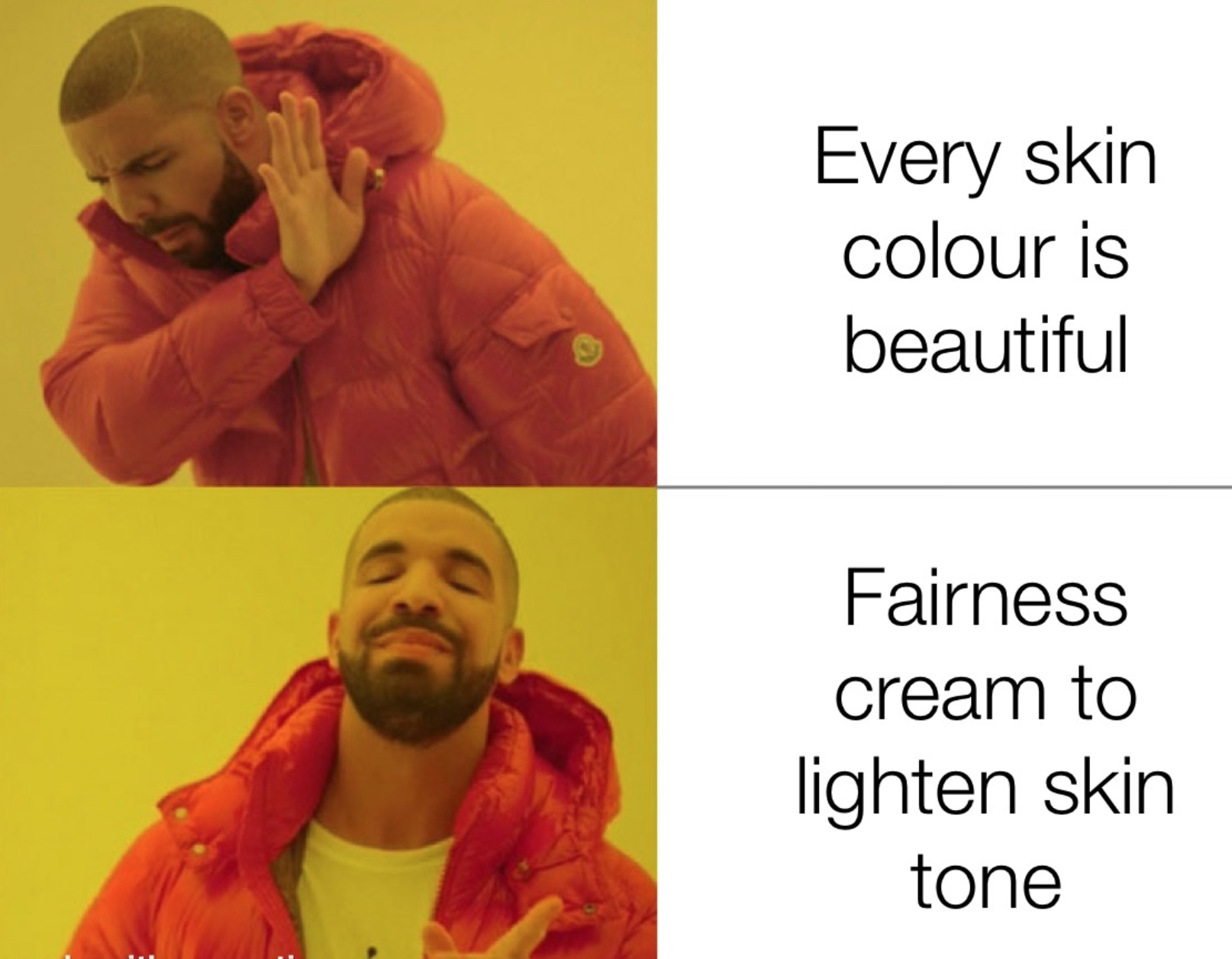 It is likely that if you are reading this blog post, you already know what a “meme” is; but do you know about “culture-jamming?”; and what does that have to do with memes? Long before memes became a staple of internet browsing, anything that disrupted the mundane nature of everyday life and the status quo with surprising, often comical or satirical acts or artworks fit the description in the 1980s.  Scholar Henry Jenkins notes, “culture jamming has now broadened its scope beyond parody ads and altered billboards. Culture jamming tactics are being used not only to contest consumer culture, but also to intervene in politics and social movements.”

Fast forward a decade or two and culture jamming is thought of almost exclusively as political statements about consumerism being portrayed through memes. According to  Kalle Lasn, one of the founders of Adbusters, the best culture jam is one that introduces a meta-meme, a two-level message that punctures a specific commercial image, but does so in a way that challenges some larger aspect of the political culture of corporate domination. There are however some like some researchers like Fink and DeLaure who harken back to the basic meaning of “meme” as” an image, word, or idea that is easily altered and repurposed and spread. They note that, yes, memes can achieve high levels of visibility and rapid, widespread reach … but as for their potential to disrupt or subvert, that depends on the specific content and context.

One aspect of context that needs further exploration is the ability (or not) of memes to reach outside of narrow cultural contexts. Perhaps we do not live in a completely globalized world.  This summer, student in my Introduction to Intercultural Communication (CMNS 180) course took on this question. 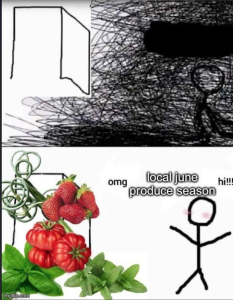 A submission by student Emili Kaplin takes on the topic living in the Fraser Valley, its agricultural focus and localized climates. She says of the “local june produce season” meme, the “People that live in climates that are always hot or always cold can not relate to local June produce season. Certain areas of the world can also not relate to the winter depression that one feels in a very rainy climate, when you don’t get much sun and therefore vitamin D. Also, it’s originally derived from the ‘are ya winning, son‘ meme, which adds a funny layer to it” and that’s a whole other story that you might have to look up 🙂 Maybe that one is more global – what do you think? 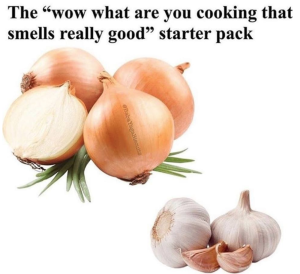 On the other hand, Tom Wilson says of the cooking “starter pack” meme, that people of cultures around the world can totally get it. He states “I’ve often walked into kitchens and said this exact thing, dreaming of some elaborate, potential meal, only to realize that the cook is simply browning onions and garlic. It has also become something of an inside joke between my friends and I. So I hope you all enjoy! This meme might be hard to interpret for people unfamiliar with the “starter pack” meme format, which attempts to boil down the essence of a particular subculture, celebrity, or individual into a series of related images. It would also be difficult to parse for anyone who isn’t familiar with garlic or onions or has never had this experience. (An aside: is there any cusine that doesn’t use onions or garlic?). Of course, the fact that it’s in English might also be a barrier to understanding the meaning of the meme.” 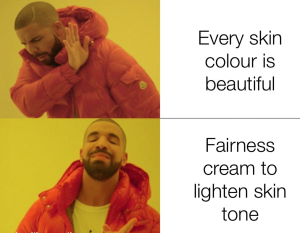 “I have used this meme because I feel like this meme applies everywhere around the world”, submits student Sandy Sidhu. He goes on to explain, “This meme represents how even though everyone tells you to love your skin tone. But still there are some ads that tell us white skin is superior; that every country has been under the influence” and goes on to explain that even his home country India give more importance to white skin superiority and there are so many companies which give promises to get a fair white skin in a short time period. “This is a issue which could hurt someone mentally and make them uncomfortable with their own skin.” 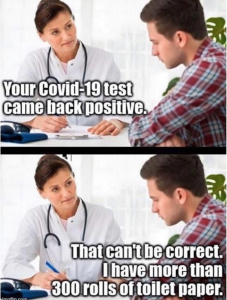 The Covid pandemic is certainly of global concern and Jimmy Brar says this meme that plays on the toilet paper hoarding phenomenon expresses more about our attitude towards life than about the actual pandemic. He says “you can have all the money in the world but you won’t be as happy as those who make just enough to enjoy life. Having too much money just messes with your mind and makes you think you are happy but in reality, you’re the sad one because if you get cocky all your relatives start to avoid you and leave you out of the group.” This is probably something that people globally can identify with even if toilet paper hoarding might not have been. 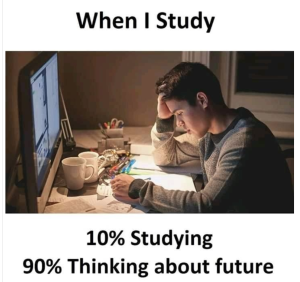 studying vs. thinking about your future. [Sarah] notes that she chose the meme for this very reason – “because it relates to most if not all students around the world including myself. I feel like I am spending most of my time thinking about both short and long term future instead of focusing on the moment 🙂 especially at this time of the semester when it is about to end. It relates to how we overthink rather than work hard to earn good marks which might lead to bad consequences. Don’t do it :)” While the image may not represent everyone’s reality of studying, she feels the inner feelings are global and crosses over lines of culture.

Our final example for this blog was submitted by Jenna Duffin on the topic of “glamorizing” and is a good companion to the one above about studying. Her submission features an illustration of characters just hanging out and enjoying life with the full caption being: “Stop glamorizing the grind and start glamorizing whatever this is.” She says the meme is ultimately about “rejecting the hard work associated with “the grind” and taking pleasure in the simple things, like relaxation.”

She does think that, “The meme uses messaging that could confuse individuals who are not in-tune with North American online culture. The meme refers to “the grind”, a phrase that has become synonymous with working hard to get something that you want, particularly at your job or place of work. Someone who does not know what “the grind” is will probably not understand the meme without an explanation. 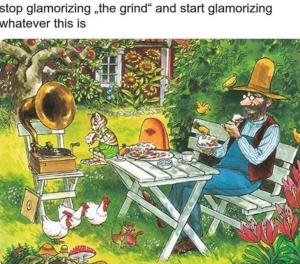 ” She goes on to explain that, “My friends and I are all in university or have recently joined the workforce. We all find ourselves pretty burnt out and overworked at times and this meme really resonates with us. It relates to how we would like to be living our lives (relaxing & being together in nature) but cannot, due to the expectations of society.

We don’t have any hard and fast answers on the question of whether memes can generally be interpreted across cultures but I think they certainly give us great insight into what is on the minds of our UFV students.