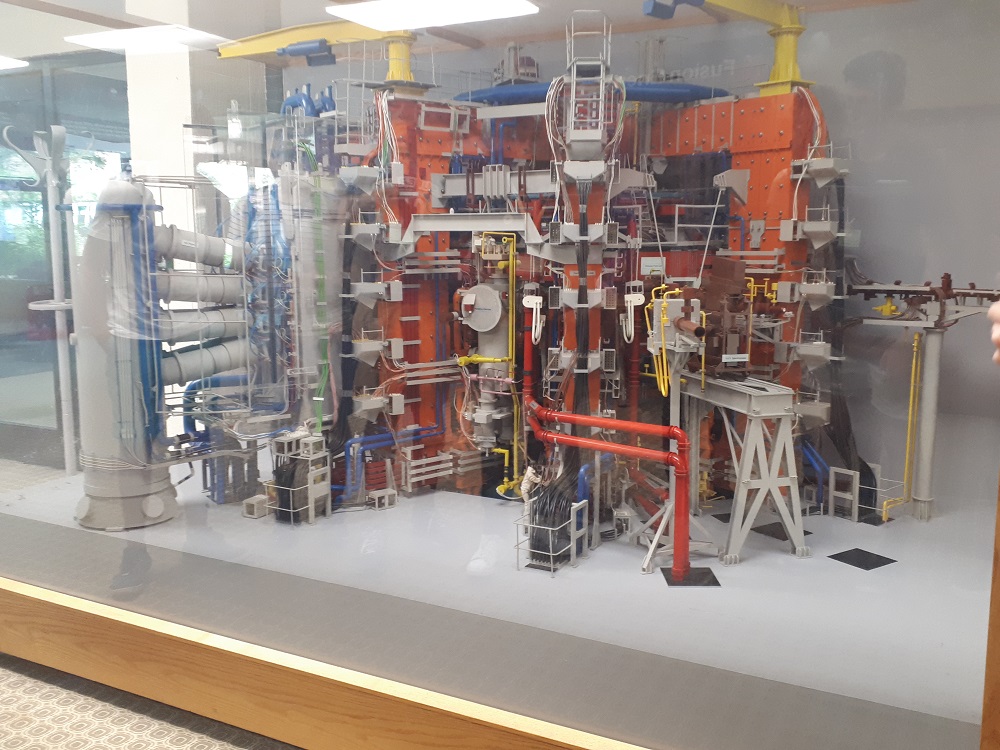 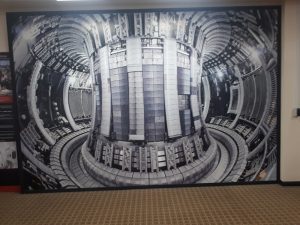 Have you ever wanted environmentally friendly and self-sustaining energy so badly you were willing to superheat helium isotopes and smash them together? If no, then this post is not for you.

Today we visited the Culham Centre for Fusion. After catching up on some missed sleep on the bus ride, we went on a tour of their facility, seeing small scale models of their fusion reactor dubbed JET. We learned the principles behind the reactor, how smashing together Deuterium and Tritium will produce Lithium, a Neutron, and energy. This process, requiring immense heat and pressure, can be replicated in JET. JET is an absolutely massive and powerful device. I’m sad to report that we only got to see part of the facility near the base of JET, and not the reactor in its entirety. 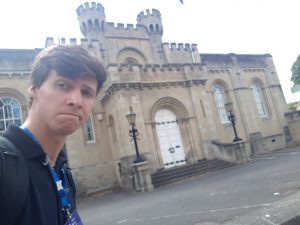 The power lines that go to this project hook up directly with the national energy grid, meaning they tap into the raw high voltage electricity that powers the country. We saw many pictures of the interior of the reactor and took a tour into the control room of MASCOT, the remote controlled repair robot, whose movements are finely tuned and synchronized to that of a human operator as MASCOT enters the inside and performs maintenance and repairs. Although the power required to run the reactor is greater than the output power, JET has proven that man made fusion reaction is possible and now much larger, more efficient designs can begin. 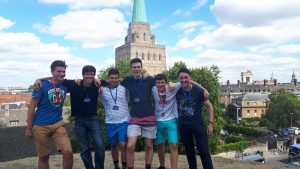 Then, like Deuterium and Tritium are injected into JET, we were injected into the heart of the town of Oxford. There, we explored the town, I took more pictures than I could count, and I shamelessly spent double the amount of money I should at a gift shop. I’m not proud of my impulsiveness. We continued to walk around and saw a couple street performers and their guitars. They were a comfortable ambiance as we explored an area called The Mound, which is the large hill beside the Oxford castle and prison. From there we were able to get some amazing pictures of the rest of Oxford due to the awesome view! Too bad there were trees between the Mound and the castle, but it was impressive enough from the base. As Flynn Rider once said: “Guys, I want a castle.” 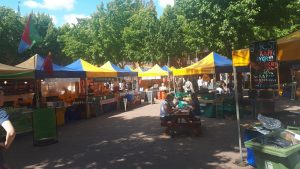 To complete the excursion, my group and I took a different route back to our bus stop, taking time to pass through a small tented marketplace that served a variety of cultural foods and sold many old knick knacks and various pieces of jewelry and phone accessories. Finally, we killed our last bit of time by exploring the Egyptian exhibit in the Ashmolean museum.

Sounds already like a lot in one day? Well guess what? There was MORE theater!

That’s right. Tonight was the audition for the events we have called the International Cabaret and the Traditions of Home. A fellow Canadian from Newfoundland and I decided to put together a small tribute to the Canadian songwriter Leonard Cohen by presenting his beautiful song Hallelujah. With Kaitlyn singing and myself on the piano, we auditioned together and it seemed like the judges liked it! In addition, I performed the song I Can’t Stand Still from the musical Footloose.

The end of the day leaves me tired and with high hopes from the judges!

Cheers to procrastination! Oh, and goodnight,