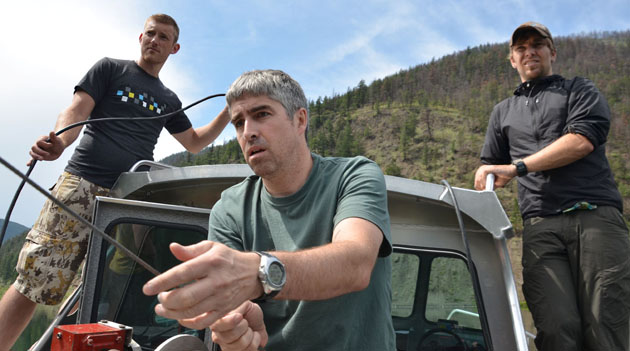 Working with NASA is a dream for most scientists. And it’s something a group of University of the Fraser Valley (UFV) students were able to experience during a recent research trip to south central B.C.

The group spent two days at Kelly Lake, near Clinton, in late July, collecting data to learn more about the lake’s history. The lake is of interest to NASA as it contains unique rock formations called microbialites, which are considered to be rare carbonate rock structures formed by microorganisms.

The four students associated with UFV were joined by UFV Geography instructor Olav Lian, and two students linked with NASA Ames Research Center. With the help of University of Northern British Columbia (UNBC) Geography instructor Brian Menounos, and his master’s student, the group used a boat and special equipment to carry out their research.

The expedition’s purpose was to core the lake’s bottom to collect sediment that has accumulated over time.

NASA’s Darlene Lim explained the coring process as similar to putting a straw in a glass of coke, capping the top, and then bringing the straw upwards.

“The coke that’s trapped in the straw is essentially your sample,” she said, adding that in the lake’s case, the sample at the bottom is the oldest, and the top is the youngest.

While NASA has been working in the Kelly Lake area since 2004 with the Pavillion Lake Research Project, learning more about the microbialites, Lian has been conducting geology research in the area for nearly 20 years.

The collaboration is important to NASA in determining the region’s history, which they believe will assist them in understanding more about the formations, such as how they’re created and why they are here.

Another key aspect in the collaboration is involving the students.

“We always try to bring as many students with us as we can,” said Lian. “We’re not the type of scientists that like to work in isolation — mentorship of students is incredibly important to us.”

“Students are extremely important to any field team and research group,” added Lim. “Otherwise things just stagnant, and don’t move on and get published, so we totally believe in bringing students in all cases.”

Daniel Huesken, who graduated from UFV in June with a science degree in geography, was one of the students on the trip. Currently working in UFV geography’s Luminescence Dating Lab for the summer, he was grateful for the opportunity to work with other students and gain field experience, all without having to be a graduate student.

“It’s pretty exciting to get out in the field and collect data, because you learn so much about it in the classroom,” said Huesken. “To get out here and get your hands dirty, playing with the dirt and sediments, it’s pretty fun.

“I feel super fortunate that UFV has a really great undergrad commitment. So it’s been a great experience.”