The CICS was proud to nominate UFV student Zaki Al-Dhamari for the annual Undergraduate Excellence Award in April 2016.

Zaki worked on two major data collation projects for the CICS. He first collected, thematized and graphed the data results of the CICS ‘Post Cards from the Margin’ research project. These were collected anecdotes from across all UFV campuses that reflected on issues of race amongst students, staff, faculty and admin. Zaki worked from the postcards and online responses that had been thematized already from a previous CICS Research Assistant. He looked at the range of response and themes, and then created them in visual form via bar graphs.

Zaki also collected, thematized, and graphed the findings of the CICS 2014 ‘Tour and Try’ research project which worked with the Sikh Heritage Museum to assess the impact of experiential learning (through a museum) amongst middle and high school student. For this large undertaking, Zaki had to go through 200 plus documents which included the consent forms, the pre-tour questionnaires and the post-tour questionnaires. Each of these questionnaires were different for middle school and high school students. Zaki first digitized each of the documents and then separated them according to the middle school/high school themes. He then created two sets of graphs based on the responses. For the one set of graphs, Zaki tallied the qualitative responses. For the quantitative responses, Zaki thematized each of the responses and grouped them together based on dominant themes that arose.

In addition to these two major projects Zaki also began the research of oral historical work by creating an annotated bibliography on oral histories and scholars and historians that have engaged in oral histories. This early research was to start a file for the upcoming CICS Book project looking at the Social History of Sikhs in British Columbia.

Zaki was presented with the annual award at the dinner and gala held at the Ramada Inn in Abbotsford. 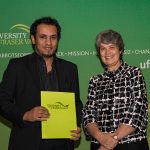