The Sikh Heritage Museum celebrated the launch of its seventh official exhibition on January 17, with over 120 attendees. The exhibition, titled Canadian Sikhs in WW1: The Forgotten Story, explores the individual stories of 10 Canadian Sikh soldiers serving in the Great War.

The Gur Sikh Gurdwara (temple), where the Sikh Heritage museum is located, is a unique Canadian national heritage site. The temple was built by the first Sikhs who arrived in Canada from Punjab in 1905 — farmers and foresters under the auspices of the Khalsa Diwan Society. The heritage community allowed new immigrants to congregate, provide assistance to each other, practice their religion, and provide food and shelter to the needy. 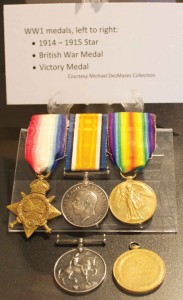 When the Gur Sikh Temple turned 100 years old in 2011, the ground floor was converted to the Sikh Heritage Museum.

2014 marked the centennial of World War I, which resulted in an estimated loss of 37,466,904 human lives. Rather than looking at this figure as a whole to come to terms with the massive losses, it is more effective to look at the role of the individual soldiers within such a mass of narratives and stories. By looking at the individual human lives, we can gain an understanding of the immense sacrifice these people were forced to make.

This exhibition is an attempt to shed light on the invisible stories of the 10 known Canadian Sikh soldiers who served in WWI.

Reminders of past mistakes

The time period when WWI broke out was a period of great racial tension in Canadian history. Incidents such as the 1907 anti-Asian riots led by the then-mayor of Vancouver, the disenfranchisement of Indians in 1907, the “continuous journey” regulation of 1910, or the turning away of the Komagata Maru ship in 1914 are just the larger examples that demonstrate the ways racism was institutionalized within the Canadian ethos at the time. Despite such immense and intense discrimination, soldiers like Bukham Singh, Harnam Singh, Lashman Singh, and John Baboo decided that they still wanted to serve the country that refused to accept them as voting citizens. Certainly then, these stories are important for understanding the nature and range of these 10 soldiers’ roles in WWI. 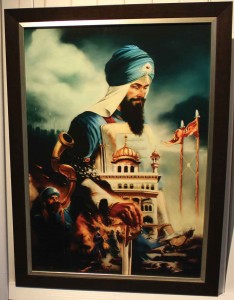 “Without exhibits like this one, this story and their individual stories would be lost to us,” Davis said. “And then there would be no understanding, no recognition, that would stop us from making the same mistakes that led our ancestors to hate, exclude, and marginalize entire groups of people or, as we did a century ago, to stumble into war.”

The Centre for Indo-Canadian Studies advisory committee members, Abbotsford City Counsellors, and many local BC veterans also attended the launch.

The exhibition is open for the general public until December 2015. All UFV students, faculty, and staff are encouraged to visit.

Or for the Flickr page with images of the launch, please visit: https://www.flickr.com/photos/ufvcics/sets/72157650347381546/.
← CICS Presents “Duty, Honour, Izzat” Exhibition
Ehsaas Readers and Writers Festival with Shauna Singh Baldwin at the CICS →