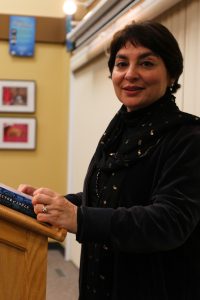 Renowned Indo-Canadian author now living in the United States, Shauna Singh Baldwin returned to the University of the Fraser Valley for the third time in five years to read from her latest work on Wednesday, Oct 10. The reading took place in the Centre for Indo-Canadian Studies to a packed room of some sixty delighted fans. Shauna Singh Baldwin’s special relationship with UFV began when her novel What the Body Remembers was selected as the book of choice for UFV Reads, a university-wide book club in 2007. She also visited UFV in 2010.

Baldwin returned as a guest of UFV’s Centre for Indo-Canadian Studies as she launched the first book tour for her new novel, The Selector of Souls.

Baldwin’s latest novel has been referred to as a deeply imagined, enthralling work, where two fascinating, strong-willed women deal with the relentless logic forced upon them for survival:  Damini, a Hindu midwife, and Anu, who flees an abusive marriage for the sanctuary of the Catholic church. Shauna Singh Baldwin’s first novel, What the Body Remembers, is the story of two women in a polygamous marriage in occupied India. It received the Commonwealth Prize for Best Book.