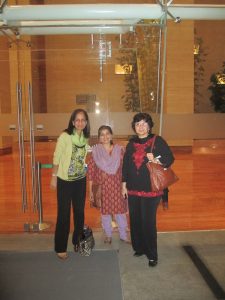 CICS Director Satwinder Bains visited the Indo Canadian Studies Centre (ICSC) at the University of Mumbai in February of this year to meet with colleagues and to fulfill a fellowship opportunity. The ICSC was initiated by the BC Premier Gordon Campbell on his Trade Mission to India in 2008 in partnership with the CICS at UFV. Phase II of this agreement has been initiated  as a result of initiatives taken by the Honourable Michael De Jong in his role as Minister of Health and MLA for West Abbotsford during the Indian Trade Mission headed by Premier Christy Clark in 2011. Satwinder Bains met with Dr. Nilufer Bharucha and colleagues to discuss and map out strategies for joint activities with both Centres.  Discussions focused on the modalities of student exchange and internship at both the partner Universities. As well, Satwinder gave a lecture at the University Grants Commission Course for Mumbai College Teachers on Multilingualism and the maintenance of heritage languages. The next day she met with MA English students at the University and gave a lecture on the following topic: The Indo Canadian Diaspora: Identity and Cultural Politics.

Both lectures were well received with enthusiastic and critical discussions about language, home, identity, belonging and transnational migration. Daniel Boond of the Canadian Consul General’s office in Mumbai participated in the lecture by providing an overview of Canada’s response to higher education for international students.