Acclaimed author Jaspreet Singh visited the Centre for Indo-Canadian Studies on October 10th, 2013 and read from his latest novel Helium. The novel, though a work of fiction encompasses around the very real, tragic and horrific government organized anti-Sikh pogroms which erupted in 1984 in Delhi, India following the assassination of Prime Minister Indira Gandhi by her two Sikh bodyguards. Given that the 29th anniversary of the tragedy will be coming up on November 1st-Jaspreet Singh’s reading was timely and powerful.

Seventeen Tomatoes, Jaspreet Singh’s debut story collection, won the 2004 Quebec First Book Prize. Chef, his first novel about the damaged landscapes of Kashmir, was a 2010 Observer ‘Book of the Year’ and won the Canadian Georges Bugnet Prize for Fiction.

The reading at the Centre was very well attended, many of whom included two English classes from UFV as well as faculty, staff and community members. 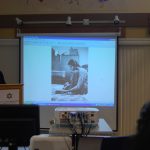 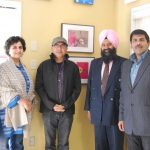