Students at the University of the Fraser Valley, many of whom are international students from India including those from the UFV Chandigarh BBA program hosted a three day akhand path at the Khalsa Diwan Society, Abbotsford Gurdwara. With the support of the Centre for Indo-Canadian Studies, the students initiated dialogue with various different departments across UFV, inviting them to take part and attend the akhand path on September 22nd, 2013.

The akhand path was very well attended, with Provost & Vice President, Academic, Dr. Eric Davis providing a very meaningful speech on the development of the Centre for Indo-Canadian Studies at UFV in conjunction with the South Asian community in the Fraser Valley. Other speakers included: Bob Rich, Chief Constable of the Abbotsford Police Department, Martin Kelly of Student Life at UFV and Satwinder Kaur Bains, Director of the CICS.

In hosting this akhand path, the students expressed their desire to acknowledge the diverse traditional values at the University of the Fraser Valley. They believed it was an outstanding opportunity for UFV to show appreciation for the Punjabi culture and its traditions. 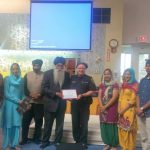 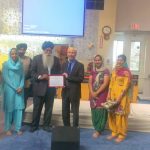