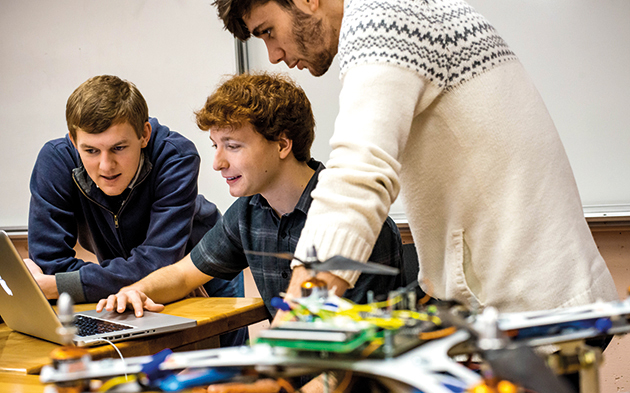 Senior physics students and their projects were featured in UFV Today.

The senior physics lab at UFV is bursting with energy on a Monday afternoon. It’s team time. There’s no formal lecture taking place; this is the time when the students in the Engineering Physics in Mechatronics program work on their group projects.

One team of four students is working on a quadcopter, built from scratch in the hopes that this baby will fly someday soon. For now it’s bolted to a support, because one small tilt could ruin months of work.

Team member Perrin Waldock is stoked by the hands-on nature of the project.

“It’s really cool watching stuff actually happen and being involved in it from the beginning,” he says. “It’s one thing to be looking at equations on a board, and it’s way cooler to plug in a motor of something that you’re involved in building and see it do what you want it to do. I had done programming before, but never with motors. That’s the best part — applying the physics we’ve learned. The worst part is the frustration when you put hard work into something and things don’t work out anyway.”

As he and Dennis Schimann work on the quad-copter itself, teammate Nikola Trotzuk works on the controller and Alex Vogt works on ultrasonic sensors for obstacle avoidance.

“If the quad copter gets too close to objects, this will tell it to stop,” he notes.

Another team, not present in the lab today, is working on a breathing phantom, a device that simulates breathing for use in radiation therapy.