The 9hr flight to London, UK was highly entertaining for one who doesn’t travel all that often… 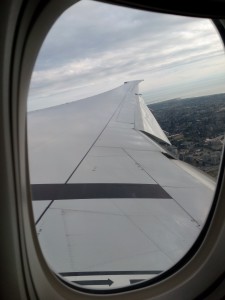 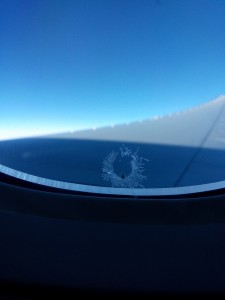 As the outside temperature drops to -45C, any water left between window panes freezes forming some beautiful crystals. The reason CO2 in the atmosphere doesn’t instantly form dry ice hail is not because it’s not cold enough, but because of insufficient pressure.

Another interesting physics note is that the plane travels the same direction as Earth’s rotation, but sneaks around the dark side of the globe to tag UK from behind. This gives you a chance to sleep in the dark over the prairies, but morning dawns prematurely as you come round Hudson’s Bay. Indeed, the plane is travelling with a ground speed ~1000km/hr which matches the tangential velocity of the Earth’s surface.

As we approached the busy Heathrow airport, aircraft were swarming in the air much like wasps from a disturbed nest. Then on to the subway: 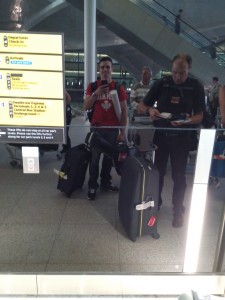 I spotted many other LIYSF students on their way to Imperial College which is surrounded with historic buildings of days gone by. Once at the residence, handshakes spread like the plague while euphoric young scientists from around the world tried to memorize over 400 new names and faces. As we coalesce  to LIYSF, we are uniting diverse cultures and backgrounds under the banner of a common passion for science. There is an excitement that something unforgettable is underway and our energy is what makes this forum so monumental.

I’ve noticed that both Jamaica and Cyprus boast at least ten attendees each which is astonishing for such geographical pipsqueaks. I believe there are two other Canadians here, both “Newfies”, who I still must meet. 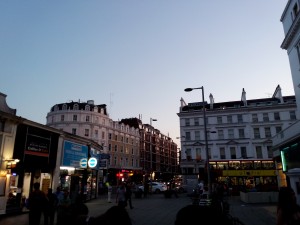 … getting to know each other better before a full day of science and social activities.

A jolly good start to an exceptional science forum!