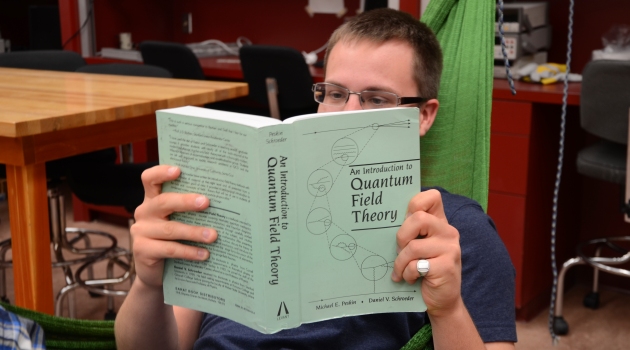 Quantum physics might be the last thing on your mind this summer, but it’s been a full-time job for three students and a professor at UFV.

And as a result of their hard work and focus, one student is off to London to participate in a prestigious forum hosted by Imperial College London.

This research project is headed by UFV professor Derek Harnett, who has three students working for him this summer.  One is funded through UFV’s work-study program, and the other two (including Richards) are funded by a grant through the Natural Sciences and Engineering Research Council of Canada (NSERC), as is Harnett.

The team is using data collected from two particle accelerators — one in Japan, and one in California — to either confirm or deny the existence of a particle called a hybrid.

When mystery particles were spotted during another experiment, Harnett decided to figure out the theoretical mass of a hybrid to see if the numbers might match one of the newly observed mystery particles.

It would be the first time in history that anyone could confirm the existence of this particle, although there is a possibility that it isn’t what they’re looking for.

“Obviously it’s more exciting if we can confirm it,” Harnett says with a laugh, “but either way, this calculation will be a success. We’ll be discovering important data about it one way or another.”

And for the students involved, this research is a huge stepping stone. The work is at a level usually pursued by grad students, and the three undergrads of Harnett’s team had to do a semester of reading to get ahead.

However, there are perks to hitting the books so hard. Richards will be in London for two weeks this summer, representing both the research team and UFV on an international level.

Richards is entering his fourth year at UFV in the fall pursuing a double major in math and physics. It’s a course load that doesn’t allow for a lot of free time, but this trip will allow him a bit of a break from his studies. But he’s just as excited about the chance to talk to other students as explore London.

“There will be students from all sorts of countries presenting their research, as well as guest speakers, seminars — not just in physics but biology, math, and chemistry, — and then tours of laboratories around London,” Richards explains.

The students of the team have buckled down and worked hard with this research, Harnett says, and they completely deserve these kinds of opportunities. He hopes the team can attend other physics conferences closer to home in the fall. The American Physicists’ Society and the Canadian Association of Physicists both hold conference geared towards undergraduates that would be perfect for this team.

“At the end of this research, these students will have their names on the paper,” Harnett says. “That will help them down the road when they’re applying for graduate school, grants, or other research opportunities. And they deserve it; they’ve done a lot of work. If it were easy, I wouldn’t need their help.”

Richards will be keeping a blog during his trip, which you can take a gander at here: http://ufv-londontrip.blogspot.ca/