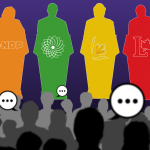 Several people with ties to UFV were involved in the recent federal election, which saw the Liberals win a majority government and the Conservatives form the official opposition. Jati Sidhu is the Liberal MP-elect for the newly created riding of Mission-Matsqui-Fraser Canyon. Sidhu, a former UFV Board of Governors member, has a long history with […]

UFV students will have the chance to hear from local candidates in the federal election at all-candidates’ debates to be held on the Abbotsford and Chilliwack campuses on October 1 and 8, respectively. The debates are being presented and organized by the UFV Student Union Society. UFV political scientist and associate professor Hamish Telford will […]