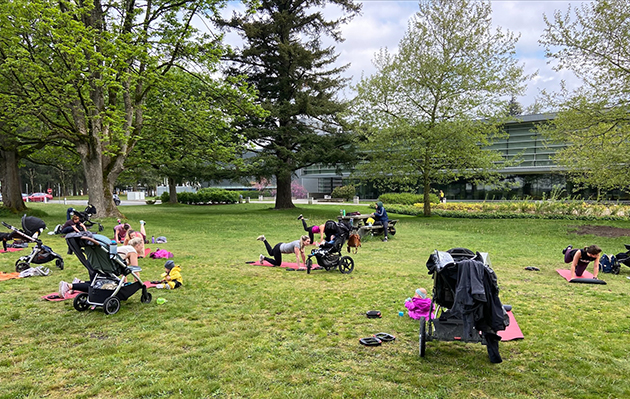 The first few months after giving birth are challenging times for new mothers. Their bodies are recovering from childbirth, they are adjusting to a new identity as a mother, and they are in near-constant demand from their baby and other children if they have them.

Professors Iris Lesser, Amanda Wurz, and Gillian Hatfield will lead the study, with the fitness class component provided by Hatfield.

The study will run in both mid-September and mid-January for 12 weeks each session.

Participants will be divided into three groups for the study. One group will take part in 12 weeks of light fitness classes in person (a mix of yoga, tai chi, and pilates), one will take part in an online version, and the third group will just be given information on how to be healthier.

If you are one of the participants not offered the fitness class as part of the research, you’ll be given access to it at a later date.

To MOMmi movement-based study will be investigating both the impact of light exercise movement on a measure of stress (heart rate variability) and self-compassion (being kind to oneself) to determine whether it positively impacts these elements of mental well-being.

Heart-rate variability (the variation of time between beats of the heart) is an important measurement tool for some signs of stress, such as poor sleeping patterns.

Participants will be given heart rate monitors at the outset of the study, and will be asked to document some information.

“Supporting postpartum women with physical activity opportunities may help them exercise more in the postpartum period,” says Lesser. “This may further improve mental well-being in this at-risk population. Despite the potential positive impact that physical activity may have during the postnatal transition, little academic attention has been given to helping women return to exercise after the birth of a child.”

The Fraser Valley is in a Baby Boom, with more babies under the age of one than any other age group in the Chilliwack, Abbotsford, and Mission area. The COVID-19 pandemic has affected everyone’s day-to-day lives, but mothers have been especially challenged. Women have experienced a negative impact on mental well-being and physical activity behaviour, with mothers being especially vulnerable with increased child-care responsibilities.

UFV School of Kinesiology researchers previously ran a group exercise intervention that was effective in improving postpartum mental health. However, this program was of higher intensity and may not be the best option for mothers who have recently given birth and are adjusting to the many demands of motherhood both physically and mentally. To this end the researchers aim to use a movement-based program in an upcoming study to assess the impact on a measure of stress (heart rate variability) and self-compassion (being kind to oneself) to determine whether it positively impacts these elements of mental well-being. 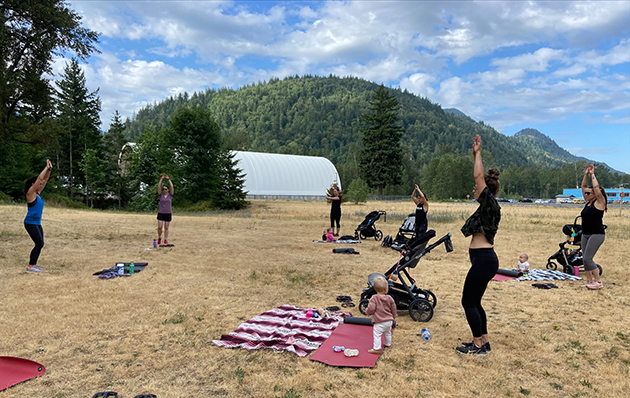 While the program will offer gentle physical activity classes, part of the researchers’ goal is to encourage balance and “slow things down” as women transition into motherhood.

The study is open to those who have given birth in the past six months and who have been given clearance from their doctor to begin an exercise program.

If you are interested in participating in the study please contact iris.lesser@ufv.ca for more information. The study will run mid-September and mid-January for 12 weeks.