The rooftop of Building G (Peter Jones Learning Commons) on the Abbotsford campus boasts some of the most spectacular views in the Fraser Valley. It is not open to the public — you have to climb a somewhat intimidating ladder and pass a locked latch to gain access — but on a sunny day, there are unobstructed vantage points of the campus, Mt. Baker, and the Sumas Prairie.

What is also hard to ignore atop the building is the sea of black aluminum alloy frame solar panels — 321 to be exact. On a recent rare sunny day in late January, Sheldon Marche, Associate Director of Building Systems, stood on the roof while glancing at his phone.

“Even on a day like today, we’ve produced 35 kilowatts that we wouldn’t have had to buy from BC Hydro,” says Marche, whose position is part of UFV Campus Planning and Facilities Management.

While students may not be able to easily go up and see the Photovoltaic (PV) solar panels, they might appreciate the production and efficiency of the panels, which are part of a strategic sustainability initiative at UFV. According to a 2015 Princeton Review survey, roughly 60 percent of students choose universities partially based on the institution’s sustainability practices.

The Project Office at UFV, which is led by Denise Brown, specializes in creating positive and sustainable learning environments, took the lead in the design and transformation of Building G’s roof.

“The Project Office has been a trailblazer for sustainability at UFV,” says Jennifer Martel,  sustainability coordinator on UFV’s Campus Planning and Facilities Management team. “Working alongside their department is always meaningful, and they’re intentional with their sustainability efforts. We look forward to more departments following their lead and integrating sustainability into their work.”

During peak sunny summer days, the panels produce enough energy (700-800 kilowatts) to power the entire Building G throughout the day. That includes lighting, all computer stations, and HVAC systems. According to a capstone project conducted by a UBC student on the post-implementation study of the Building G solar panel system, the building is working at a much higher efficiency than previous years and the project’s ROI has come down significantly from 18 years to an estimated 3-6 years.

“We’re putting the energy back into the grid and hopefully we can actually harvest that energy,” says Brown, the Associate Director of Capital Projects at UFV. “So, this way we’re not so reliant on our utility providers. It’s another check mark with our UN sustainability goals and also our own mandates within the department for sustainability and environmental consciousness.” 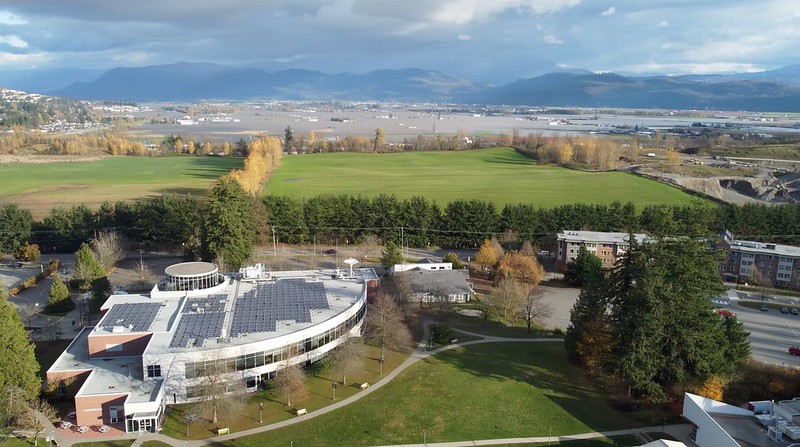 The Building G solar panel project started in February 2021 and took two months to complete. This is not the first time UFV has implemented solar energy onto its campus. In 2020, Building E (the Athletic Centre) on the Abbotsford campus installed solar panels on the side of the building.

In the year since the Building G solar panels were installed, the project has not only reduced energy costs, but has reduced the university’s carbon footprint. With the help of government grants, there are plans to expand the solar panels model onto several other UFV buildings in the near future.

As Marche stood on the library building roof, he gleamed with pride at the value the panels have already brought, and what they will continue to bring — no matter if it is January or July.

“It’s already started to pay off,” he says. “We’re consistently seeing between a 17% and 20% reduction in energy in Building-G just by having these panels up top.”

UFV Campus Planning ‘walks the walk’ with sustainable renovated B-150 work space
Get to Know podcast: Satwinder Bains on social justice and anti-racism