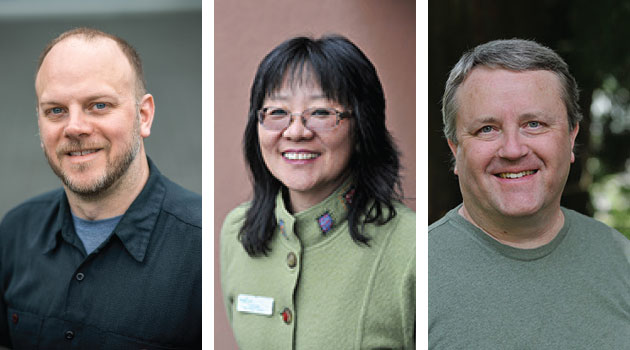 Three scientists at the University of the Fraser Valley have received federal funding to continue their research.

Dr. Lucy Lee, Dr. Derek Harnett, and Dr. Olav Lian received a combined total of $345,000 from the Natural Sciences and Engineering Research Council. The three grants each cover a five-year period, until 2022. The funding received by the three scientists will allow them to hire student researches, fund travel and fieldwork, and enhance their labs.

“We are very pleased about these grants and proud of our NSERC recipients,” said Dr. Adrienne Chan, AVP of Research at UFV. “The scholarship of Derek, Lucy, and Olav is exemplary — and is a reminder that research is important to address issues in the world, and also has a place in a teaching university. All three recipients are leaders in their fields and have received national recognition. The research that they do involves undergraduate research assistants and embodies the type of research that can occur in a university like UFV. Undergraduate research experiences are a hallmark for UFV.”

Dr. Lee, who is the Dean of Science at UFV, received $160,000 for her project titled Development of Fish Cell Lines for Use in Ecotoxicology and Fish Health: The Case for Fish Olfactory Cells.

Her research will focus on developing cell cultures of fish olfactory cells, so that she and her team can study the effects of environmental contaminants on fish species. Since fish such as salmon depend heavily on their sense of smell (olfaction) for navigating their environment and survival, contaminants that affect olfactory cells can have a negative impact on their population. By developing and studying “continuous immortal cell lines” of fish cell cultures, Lee and her team can research the effect of contaminants without using large numbers fish.

Dr. Lian, an earth scientist and associate professor in the Geography and the Environment department, runs UFV’s Luminescence Dating Laboratory, the only one in western Canada. His project, titled The Nature and Timing of Early Postglacial Change, Central Coast, British Columbia, received $110,000.

Understanding timing of environmental change using grains of sand as “clocks” is the focus of Lian’s research. As geochronologists, Lian and his associates study the physical environment as it has changed over the millennia by analyzing long-buried grains of sand using a technique called luminescence dating, which allows one to date when grains of sand buried within a landscape were last exposed to sunlight — or when that landscape was last unstable.

In this project, he will apply luminescence dating to areas of the British Columbia coast to gain insight into how the landscape has evolved since the last glaciation. This helps predict how the land will adjust to possible future climate change. Analyzing the history of the landscape also helps researchers understand the historical patterns of human migration in B.C.

Dr. Harnett, an associate professor in the Physics department, received $75,000 for his project, titled Properties of Hybrids from QCD Sum-Rules. His research focuses on quantum chromodynamics.

Harnett investigates how quarks stick together and bundle themselves into composite objects known as hadrons, the most familiar examples being protons and neutrons. However, QCD seems to allow for a richer collection of hadrons than what has actually been observed in experiment. Whether or not these so-called “exotic” hadrons exist is an open question. His research focus over the past few years has been on using QCD to predict properties of these unobserved states in order to provide guidance for future experimental searches.

“My work is discovery research aimed at a better understanding of the strong nuclear interaction,” he says.

In addition to the three new NSERC grants recently announced, Dr. Lin Long, an associate professor of physics at UFV, is in the second year of an NSERC Collaborative Research and Development Grant. Her Automated Honey Extraction System project, in cooperation with the Worker Bee Honey Company Ltd of Chilliwack, received worth $95,143 over two years.

Dr. Noham Weinberg continues to conduct research funded by an NSERC grant that runs through 2020. He received $100,000 over five years.

Shelagh Rogers to speak at UFV on being a witness to Truth and Reconciliation
Dr. Gabor Maté at UFV – Video