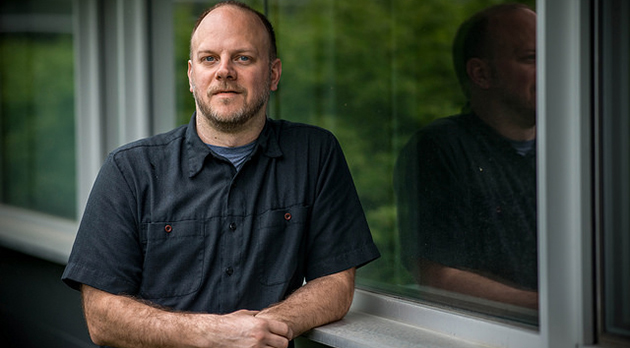 Derek Harnett’s research explores things we can’t see and that might not exist.

A world-recognized expert in quantum chromodynamics (QCD) sum-rule methods, Harnett’s work isn’t easily understood by the layperson, but it’s heralded within the physics community. His research — fuelled by insatiable curiosity and funded by the Natural Sciences and Engineering Research Council of Canada — paved his way to receiving UFV’s 2016 Research Excellence Award.

A member of UFV’s Physics department since 2003, Harnett’s nearing the end of a year-long Prairie sabbatical spent as a University of Saskatchewan adjunct professor. Working with graduate students on calculations that take months to complete, his commitment to the next generation of physicists is rivaled only by his passion for his work — the practical implementation of which might not be known for hundreds of years.

“Early pioneers of electricity research started by wondering why balloons stuck to walls after rubbing them on someone’s head. Then, a couple of hundred years  later, that information becomes useful and you’re treating brain cancer with electron beams, or you’re holding a smart phone, or you’re carrying around a tiny flash drive that can store nearly ten million books,” he explains.

“Regarding some aspects of QCD, we’re at the rubbing-balloons-on-your-head stage.”

Basically, Harnett investigates how quarks stick together and bundle themselves into composite objects known as hadrons, the most familiar examples being protons and neutrons. However, QCD seems to allow for a richer collection of hadrons than what has actually been observed in experiment. Whether or not these so-called “exotic” hadrons exist is an open question. His research focus over the past few years has been on using QCD to predict properties of these unobserved states in order to provide guidance for future experimental searches. Harnett’s earlier research pioneered the use of Gaussian sum-rules to predict hadron properties, and he discovered an important aspect of instanton effects in scalar gluonium sum-rules, resolving controversies that have surrounded this topic for almost 20 years.

“This is discovery science; it’s really directed at a fundamental understanding of the ground floor of strong interaction studies,” he says.

UFV Dean of Science Lucy Lee points out that as a theoretical physicist, Harnett is having an impact in a field that has attracted some of science’s greatest minds.

“Theoretical physics is probably one of the most difficult fields to convey knowledge to the general public, as it employs mathematical models and abstract concepts that can not be easily understood by the masses,” Lee says. “Yet, theoretical physicists include the brainiest of human kind, including  Plato, Aristotle, Copernicus, Galileo, Newton, Einstein, Bohr, Schrodinger, Dirac, and Hawking, among many other brilliant minds. Among theoretical physicists, there is a unique breed that looks into the realms of the subatomic, i.e., to the core of matter, into ‘particles’ unseen and difficult to prove. This is where Derek Harnett is beginning to make ripples.

“Derek’s research excellence is not only doing all the metaphysical thinking and analysis of quantum particles, but passing on the knowledge to students. Although hard to comprehend, he uses terms in a way that the average undergrad student can understand.”

Since joining UFV, Harnett has received UFV’s inaugural Science Research Award, has more than a dozen publications to his name, and has done his share of participating in UFV committees, including stints in both Science Advising and Senate. He also recently acted as the head of UFV’s Physics department. He has presented his work at conferences across Canada, the United States, and Europe, including the prestigious QCD 12 conference in Montpellier, France.

Throughout it all he’s never lost his passion, thanks in part to dedicated students and the UFV Faculty of Science, including, of course, his colleagues in the Physics department.

“I do sincerely consider it a team,” he says of the department.

“They’re real go-getters that take care of things. Time is a precious commodity when you’re teaching or researching, and everybody gets on board to help each other meet their goals.”

“Derek has completely blown away my expectations of a university professor. Stepping into one of his classes is a transition into an exciting environment,” she says.

“His courses spark a whole new wave of thoughts and perception of our surroundings, literally changing the way students view the world.”