The great hall was a-buzz with great brains on April 7 when students from a variety of disciplines gathered to share their research via posters and demonstrations.

Judges strolled the aisles, chatting to students about their research.

Criminal justice student Ashley Reddicop investigated the motivating forces behind young people joining gangs in British Columbia, including individual motivations, group dynamics, and environmental opportunities. She noted noting that proximity to the border, a laid-back attitude toward marijuana from police, and a good growing climate, makes it easier for gangs to gain a foothold in the drug trade. 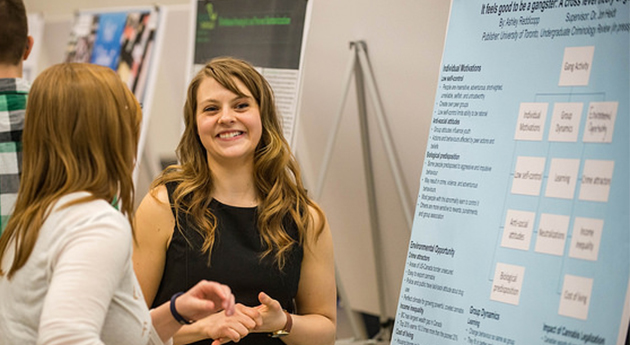 Her article on a cross-level theory of gangs has been accepted to the University of Toronto Undergraduate Criminology Review.

Madelaine Bourdages and Alexandra Groeneweg presented their research on threats to the watercourse for salmon at Abbotsford’s Stoney Creek, including residential development, proximity of trails, impacts of agricultural use, and even the effect of dogs running through and swimming in the creek. 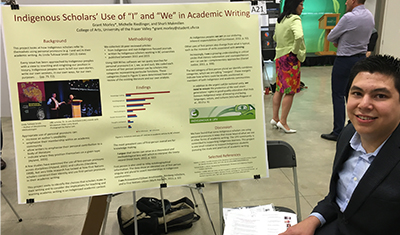 Grant Morley worked with professors Shurli Makmillen (English) and Michelle Riedlinger (Communication) to analyze the prevalence of first-person vs. third-person in indigenous and non-indigenous academic writing.

“First-person use is discouraged in academic writing, but aboriginal people are using it in that forum in more and different ways,” he noted. “It’s connected to their relationship to the community they focus on.”

Tasha Guenther immersed herself in World War I for her research, analyzing thousands of articles in British newspapers and periodicals to see how they portrayed soldiers from India who joined the British Empire’s troops.

“They tended to be characterized as ‘loyal’ and ‘devoted’, an idealized version of the soldier,” she notes. “It was partly an attempt to make the citizens at home feel safe, with the idea that Britain had access to so many peripheral troops from the empire. They also used the propaganda as a recruiting tool. Indian troops who recruited more soldiers from their home village were rewarded.” 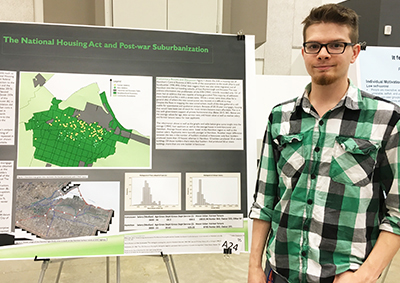 “The national housing program [precursor to today’s CMHC] didn’t create the suburbs, but it certainly did help make them possible,” he noted. “That and the rise of the automobile made moving out of the urban core a possibility.”

Alanna Strangway presented her honours work in environmental geography on monitoring the spread of invasive plant species in Abbotsford.

She took data collected by the Fraser Valley Regional District and the City of Abbotsford, and analyzed which types of areas certain invasive species (including tansy ragwort, Japanese knotweed, giant hogweed, chervil, and scotch broom) tend to thrive in.

“My research results will help the City of Abbotsford carry out more effective weed management programs,” she noted. 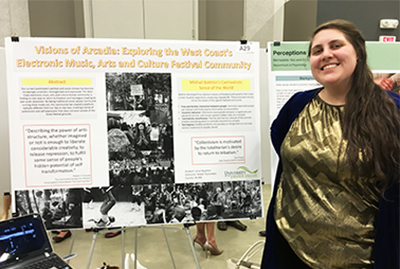 Visual Arts student Lena Yacyshen shared her research and photographs documenting the Arcadia festival as a site for taking traditional social values and norms and “turning them inside out.”

“This community is radically different from the ‘everyday’,” she noted. “Participants subvert the dominant social norms through humour and parody, just like a Medieval carnival.”

At the end of the afternoon, award winners were chosen in various categories.

Student Research Day is presented by the UFV Research Office.