The SASI was pleased to host Dr. Tahseen Choudhury on July 23, 2019. Dr. Choudhury (PhD, Greenwich, UK) presented on the historical trajectory of the South Asian diaspora in Britain. The talk focused on the South Asian diaspora from India’s independence in 1947 to post-diasporic hybridity and the emergence of transcendental time in diasporaisation in contemporary Britain Time with its phenomenal streams of elapse which signifies its temporality.

Dr. Choudhury argued that in contemporary Britain diasporisation has embarked on a platform that encounters a transcendental time of redefining national infrastructure as hybrid, multicultural and significantly untraditional. This time factor works intrinsically for the diasporisation of South Asians in Britain. Time is not merely meant to be a chronology of events for them; rather their run has always been against the time; they have encountered endless roughness of time to make their presence felt in the land of colonizers. 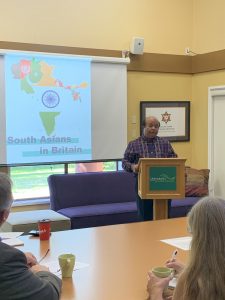