The CICS’s curated exhibit on Canadian Sikhs in WWI (originally launched in 2015) at the Sikh Heritage Museum traveled to The Penticton Museum and Archives. The Penticton Museum exhibit, called British Columbia’s War, 1914–1918, aims to educate British Columbians about the contributions of their forebears in the First World War, and will be available for viewing from January 26 to May 29, 2017.

As a special feature to run concurrently with the British Columbia’s War, the Penticton Museum & Archives presented the Sikh Heritage Museum exhibit: Canadian Sikhs in World War 1: A Forgotten Story.  The exhibit describes the lives and sacrifices of 10 Canadian Sikh in both English and Punjabi languages, a first for the Penticton Museum & Archives.

“Hosting an exhibit about Canadian Sikhs who fought in World War I highlights an often unknown piece of history that took place during World War I,” said Dennis Oomen, Manager/Curator of the Penticton Museum and Archives.

One of the strengths of this traveling exhibition is its deeply collaborative nature. Partnering community museums have been encouraged to expand upon the exhibition’s major themes by adding content from their own collections to tell the stories that matter most to their visitors.

(Parts of this newsletter have been taken from an RBCM Press Release, dated January 14, 2017) 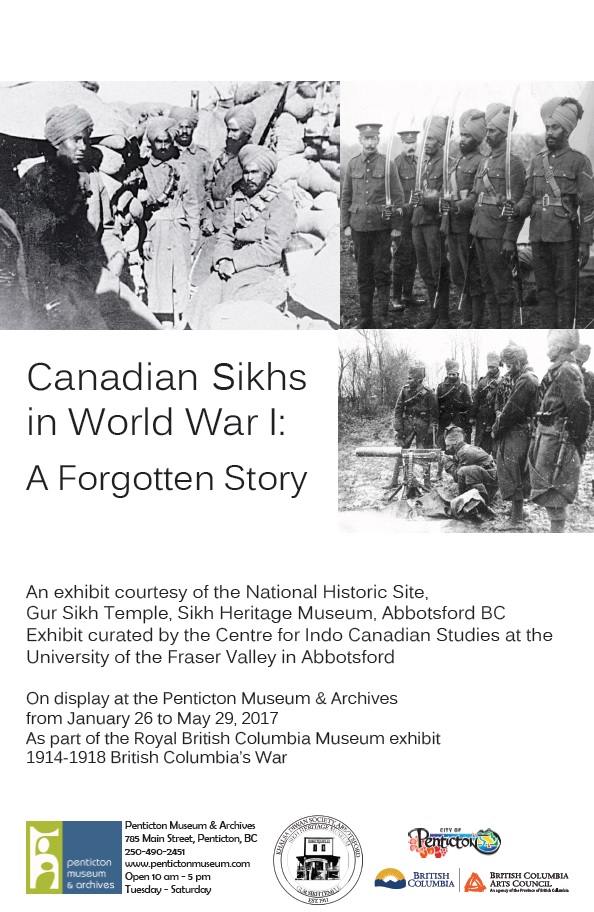