Taken from the Royal BC Museum Media Release:

To many people who grew up on Vancouver Island, the scent of fresh cut pine and the sight of stacked plywood evokes long held memories of the Indo Canadian community’s logging and forestry roots in British Columbia.

But the historical accounts of logging and forestry in British Columbia have not fairly or equitably represented the history of Indo Canadian companies and individuals. Today, the Indo Canadian community from the Lower Mainland, the Fraser Valley and Vancouver Island was invited to stage an intervention in the Logging Exhibit in the Modern History gallery to reframe the historical record to include their poignant narrative.

Through our collections and public exhibits we can share with the world the history of Indo Canadians in the province, . Jack Lohman, CEO of the Royal BC Museum. The Indo Canadian community has had an outsized but unheralded impact on British culture and economy, and we welcome this engagement with our galleries as a form of critical dialogue with those who have been who have been left out or written out of our history.

The intervention, organized by the Royal BC Museum, the Centre for Indo Canadian Studies at the University of the Fraser Valley and the David Lam Centre at Simon Fraser University, included a dynamic telling of stories not shown or told in the exhibit and discussions about what the exhibit might look like and what messages it might convey in the future.

The intervention is the first in a number of joint initiatives. We take encouragement from the Royal BC Museum partnership initiative as we undertake long term correction of past omissions, in the Logging exhibit, as forestry industry involvement is the thread that ties our provincial migration journey. The staging of this event in the provincial museum is significant for the Indo Canadian community, conspicuously and publicly marking what all hope is the beginning of a committed long-term relationship and a defining moment in the provincial correction of past wrongs.

The invitation of diverse cultural groups to help revise decades-old museum content is not a new concept for the Royal BC Museum, which successfully partnered with the First -winning feature exhibition Our in 2014. The Royal BC Museum has supported other BC Government initiatives to correct the historical record, recently developing school outreach kits, website articles and other materials to commemorate the Chinese Historical Wrongs. About the Royal BC Museum ural history, advances new knowledge and understanding of BC, and provides a dynamic forum for discussion and a place for reflection. The museum and archives celebrate culture and history, telling the stories of BC in ways that enlighten, stimulate and inspire. Looking to the future, the Royal BC Museum will be a refreshed, modern museum, extending its reach far beyond Victoria as a world-class cultural venue and repository of digital treasures.

The launching event for this new initiative from the RBCM took place on Saturday, November 21st with over 150 guests in attendance. It was an energizing event which allowed attendees the opportunity to provide feedback and suggestions as the project moved forward. According to one attendee:

Saturday’s activities were clearly a tremendous success based on lengthy conversations I had with several of the participants during the course of the “intervention” and afterwards. The event, from conception to execution, was excellent and well-received. It is no mean feat for an institution operating at the scale of RCBM, and with such a lengthy and significant history, to undertake such a considered re-examination of its role and approach to representing the history of our province. It speaks volumes to the cultural sensitivity and innovative vision of the museum’s leadership and staff.”

The CICS looks forward to continuing the project and working with the Royal BC Museum to bring this significant history forth. 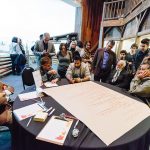 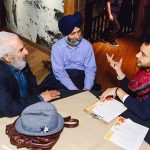 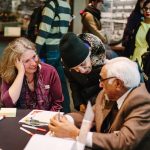 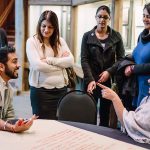 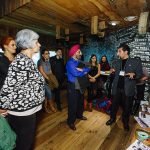