The second Faculty of Science AAAwards recognized the following individuals 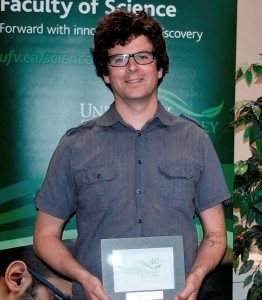 Dr. Gabriel Murray, from the Department of CIS for overall Awesome Achievement in all academic areas which included excellent Teaching reviews from students. He taught a wide array of courses during his 2 yr probationary period including: CIS 185, 190, 380, COMP 155, 331, 350, 455, from introductory, intermediate and advanced levels. His courses were popular and most had long waitlists with students clamouring to take the courses he was assigned. In terms of Scholarly Activity/Research, Gabe as he is affectionately known by his students and colleagues, received UFV’s research and scholarly releases and work-study grants, engaging several students in software research as well as participating in various professional meetings. He has been active in institutional service participating in the faculty of science curriculum committee as representative for CIS as well as in several other committees including chairing the CIS BSc program proposal, member of Data Analysis Certificate committee, Head selection committee, etc. He also participates in various outreach events for the community at large including Science Rocks and Math events. 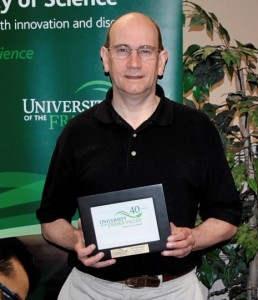 Dr. Tim Cooper, from the Department of Physics for Terrific Teaching. He is a seasoned teacher with excellent evaluations every year for his courses in introductory as well as upper level courses. Comments like “he is THE BEST” occur commonly, including unofficial comments from ratemyprofessor.com that rates him a 4.6/5 (n=47) with statements like: “Its my own fault I failed his class. Great sense of humour, and I gotta say even though the demonstrations rarely worked, they still got the idea across. Amazingly helpful, and his door was always open. I’ll be damned if I’m having a different teacher the second time around.” are testaments that students indeed appreciate his teaching. He was nominated by many students for the University-wide Teaching Excellence award this past year, and although he was not selected, the student letters were very supportive: “Dr. Cooper challenged me to think outside the conventional realm, and equipped me to tackle a variety of problems. He continually goes out of his way to ensure that his students thoroughly understand concepts, and at the same time manages to challenge and push the boundaries of our understanding” 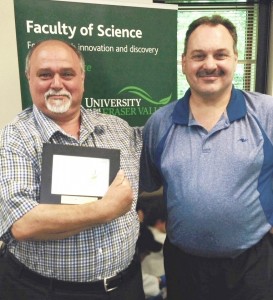 Dr. Noham Weinberg, from the Department of Chemistry for Remarkable Research. It is no secret that Noham represents one of the prominent faces for Research at UFV and he was last year’s recipient of the University-wide Research Excellence award. He involves many students in his research, publishes with them and mentors them into future scientific careers. He has been prolific this past year in terms of scientific output both in conference presentations and peer reviewed publications as he has done for the past 25 years he has been with our institution. He is also the recipient of various external awards including Western Canada Research Grid access to supercomputers for several years in a row. He has attracted many international colleagues to spend some time in his Molecular Modelling lab including colleagues from Canada, USA, Europe and Asia. Noham has been invited to present at national and international conferences and has been busy not only in research but also in teaching and service, including as senator and several committee roles within the department, the faculty and university at large.

Dr. Ian Affleck, from the Department of Mathematics & Statistics for Outstanding Outreach involving regional school students in various Math activities, including Math Contest, Math Challengers, Math Mania. This year, Ian brought Math Challengers to UFV with over 200 students in grades 8 and 9 participating in tournaments and hosting the Provincial competition in March. He also volunteered countless hours organizing the annual Math Competitions which have exceeded attendances compared to other regional Math competitions. His energy, enthusiasm, organizational skills and collegiality have been outstanding not only in these outreach activities but also in teaching, service and scholarly work.

Christine Dalton, from the Department of Biology, and Melinda Saretzky, from Science Advice and Dean’s office, for Superb Service. These individuals have gone above and beyond the call of duty in various service roles and not once have they been seen without a nice smile in their faces. It is a pleasure to work with such caring individuals, and the Faculty of Science as well as the community at large are very lucky to have such dedicated personnel among our midst. Christine has been organizing and running Science Rocks camps as well as several other science outreach events while Melinda has been superb running faculty council and curriculum meetings, keeping webpages updated, blogging, and juggling student advice appointments and queries.