This is a teleconference from New Brunswick. 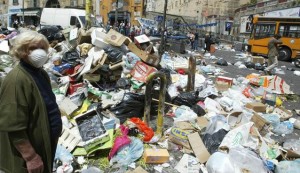 A presentation by Robert Krausz, PhD Environmental Policy and Planning

Everything done by human societies has one thing in common: the generation of waste as an end consequence. All of nature shares this waste-producing feature – but whereas the rest of the natural world functions under sustainable, circular resource-to-waste-to-resource systems, Homo sapiens above all other species has evolved to operate via one-directional, linear systems of resource-to-waste, that are highly unsustainable and have created a serious and growing waste problem. The multiple consequences include air, water and soil pollution, toxic impacts to health, and the ongoing loss of finite land base to the continual need for new landfill dumps.

Zero Waste arose around the world at the grassroots level, as an alternative approach to the waste management paradigm that has created this ongoing waste problem. Local governments gradually began to embrace the idea, and beginning in 1996, towns and cities across the globe declared ‘Zero Waste to Landfill’ initiatives – promising by specified deadlines to close the resource loop, and thereby totally eliminate the future reliance on dumping residual waste into holes in the ground. Hundreds of communities around the world have since made similar pledges, with the first deadlines passing in recent years.

The results have been a widespread disappointment, with no town or city anywhere coming even close to achieving the 100% diversion goal. Instead, waste generation continues apace, and in the more crowded places of human settlement a waste crisis is intensifying, as the need for more and more landfill space becomes harder and harder to satisfy.

Why has Zero Waste been such a consistent failure to date? If natural limits require that Zero Waste be achieved, then how can we get there? And, what does the Zero Waste conundrum tell us about the current state environmental and sustainability movements – as they try to deal with mounting crises such as global climate change, resource depletion, and growing social injustice due to human-caused pollution.