Archived from The Cascade, April 10 2013. Original post by Beau O’Neill. 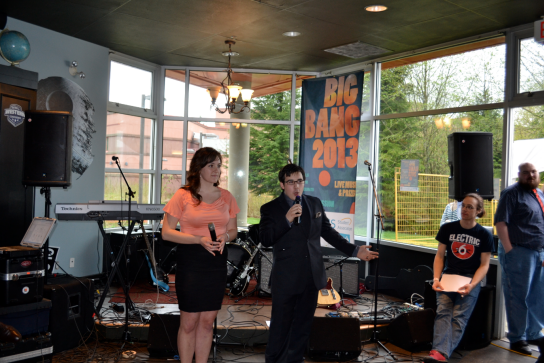 What’s the active chemical in fun you ask? I don’t know, but on Friday night there was plenty of revelry at the Big Bang 2013, the second annual end of year event hosted by the combined associations of the Biology and Chemistry, Physics and CIS students.

The night was a success with several hundred people coming and going, maintaining a general level of packedness at campus pub AfterMath. There were delicious free appetizers—sausage roll segments and pizza triangles—that went well with the cheap Pabst on tap and the exquisite peppermint tea. Prizes were given out for trivia answers and to lucky contestants who entered into a draw. Luckily the rain held off from the overcast sky so everyone could enjoy the seating set up outside next to the spirits stand and balloon-hat station. The main attractions were the three bands that played to a grooving audience.

The evening began with a bang from Derrival, a lifted mix of a band that sounds like a less intense Battles playing through a Grizzly Bear filter. They were very good at what they played, and provided a good start, even if they’re name invites at least a few jokes. Until the next day when I saw their webpage I was sure they were a German import, Der Rival, on tour of the West Coast a long ways from home. But no. 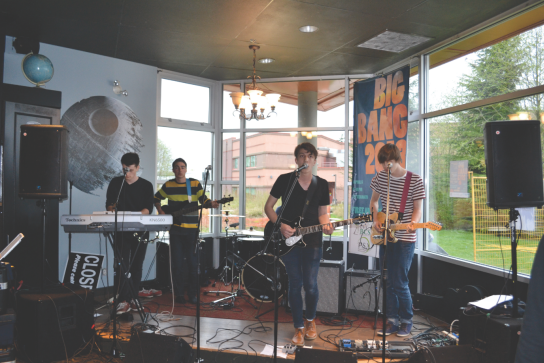 Coming on stage next were local legends Harma White, who rocked the crowd with their mix of classic rock and blues, alternating covers of the White Stripes and the Allman Brothers with their own fast-paced pieces. The geeks that were jamming the pub to the gills seemed to enjoy this intrusion of hipness into their world of bases and aldehydes, adding some acid into things.

After Harma White came No Island, a band I actually missed because there was a lack of information around the place and I was sure the event was over. I almost left after Derrival to be honest, because there was no program schedule, but that’s a minor criticism of the well put together gig. No Island, if you’re interested, is a jazzy romp with such hits as “The Waiting Game” and “House of Cards,” both of which are very tight pieces written around interesting rhythms and cynical themes of failed dreams.

It was well put-together, with a great turnout. 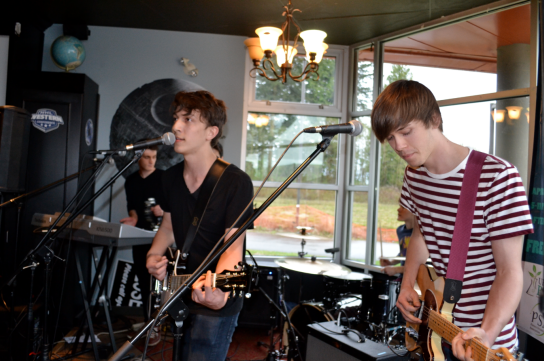