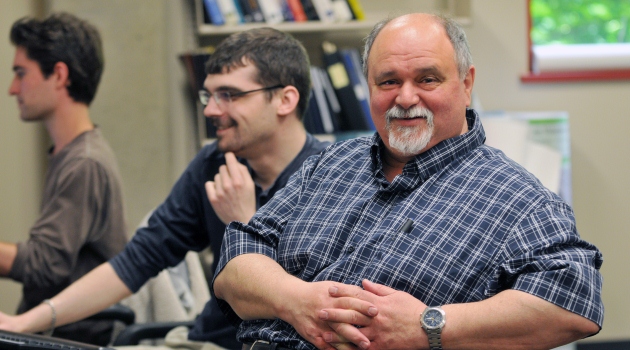 “For, me, it is like drinking clean water fresh from the source! And having students working with you, seeing them grow into independent researchers, is an even greater joy. It is what drives me. Their enthusiasm is contagious!

“I like teaching in a classroom setting but this a completely different experience. Some students are rather timid coming into the research lab because they haven’t done research before. Eradicating their fear, teaching them to form their own opinions and to defend these opinions, even if they disagree with mine, is very satisfying.”

In recognition of his dedication to research, his mentorship of many UFV students, and his international reputation in the field of computational chemistry and molecular modeling, Weinberg has been named the 2013 recipient of the UFV Research Excellence award.

Because of the dedication of faculty members like Weinberg who pursue their research interests in addition to their teaching duties, undergraduates at UFV get research experience that they wouldn’t get anywhere else.

“With some experience, our undergraduate can do the work that would be done by graduate students at other research-intensive universities.

“I cannot control their steps in obtaining research results. It is therefore very important that the students themselves can assess the quality of the data. This really fosters their independence and self-reliance,” he adds.

“Some of the students I had were not very strong in the classroom, but then they would turn into real jewels once they started doing research. With the newly acquired confidence, they improve their academic performance as well.”

Weinberg runs the Molecular Modeling Lab at UFV, where he and his protégés practice a ‘what if’ type of theoretical research. Instead of using actual chemicals, equipment, and test tubes, they use computers to carry out simulated cyber-chemistry experiments using sophisticated software, providing outputs that match results of real experiments.

This is important because, in some cases, carrying out the experiment in the real world would take millions of years, or need extreme conditions, or be prohibitively expensive.

“Computer-simulated models can be an extremely useful substitute for experiments,” notes Weinberg. “For instance, we can screen molecules to see whether or not they would be useful as new antibiotics, and reduce the enormous number of possibilities to a manageable number of promising candidates before committing to the actual experimental trial.”

Molecular modeling is an interdisciplinary field where computers and numerical methods of applied mathematics are used to solve precise and approximate physical models of atomic, molecular, and supra-molecular systems of interest in physics, chemistry, biology, material sciences, and geosciences. With advancement of computer technology, the accuracy of its predictions reaches the level comparable to experimental and, as a result, molecular modeling complements and increasingly replaces often costly and dangerous experimental work.

The UFV Molecular Modeling Lab was created in 2001 and since then has hosted approximately 50 undergraduate students from various departments, including chemistry, biology, physics, math, and computing.  These students worked on various interdisciplinary projects and collectively have received six NSERC post-graduate scholarships, 15 NSERC undergraduate student research awards, and 16 UFV undergraduate research excellence awards. A total of 32 of them presented their results at national and international conferences and 22 co-authored papers published in refereed journals.

“Being able to work alongside Noham in real scientific research has set up a foundation for my future education, and inspired me to pursue research further in graduate school,” noted Jason Ho, a physics honours student and president of the Physics Student Association. “He provides an opportunity for students from a wide range of disciplines to engage in real scientific research and develop skills that cannot be easily learned in a classroom. Although his passion is research, his heart is in teaching, and through that combination he has touched the lives and educations of many students.”

Heather Wiebe was able to progress directly into a PhD program at Simon Fraser University after earning her bachelor’s degree in chemistry. Weinberg, who is an adjunct professor at SFU, is supervising her doctoral studies.

“I am convinced that having Noham as an undergraduate supervisor and mentor has played a large role in my academic and research successes,” she said. “My PhD thesis is an original idea inspired by my undergraduate work with Noham; he helped me shape my rough ideas into a viable research project and on its merits I was accepted directly into the PhD program at SFU from my bachelor of science degree.”

As for how he feels about receiving the Research Excellence award, Weinberg says it’s an honour.

“I am thrilled and humbled. There are so many people deserving of such an honour at UFV and I am very proud to be part of this group.”