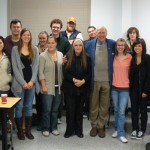 Paul Almond is a landmark Canadian filmmaker who pioneered the development of the Canadian film industry in the 1950s. In over four decades of film-making he directed 120 dramas for Canadian, British and U.S. TV networks, and created the ground-breaking documentary “7Up”. In 1970, Almond wrote and directed the feature film “Act of the […]