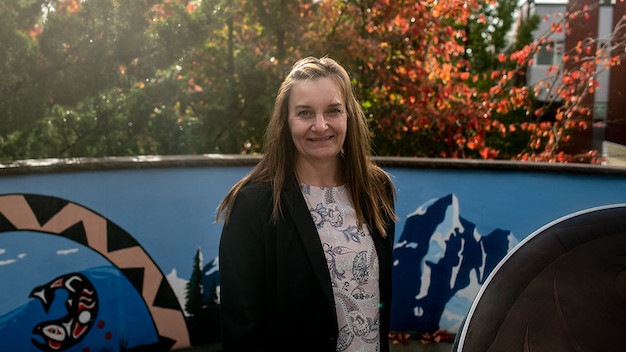 An English major with an interest in Indigenous studies, Kerton earned her Bachelor of Education degree from UBC in 2000, leading to a job with the Abbotsford School District, teaching Grades 1, 3, 5, and 7. While discussing the challenges of landing a permanent position, Kerton’s friend — a former music teacher turned police officer — convinced her to apply for the RCMP. That friendly advice turned into a diverse and rewarding 18-year career in policing.

Kerton served as an RCMP constable in Chilliwack, Penticton, Surrey, and Coquitlam with portfolios that included drug trafficking and gang violence — but it was her time in a limited- duration posting in an Indigenous community north of Terrace that had the greatest impact.

Responsible for four communities totaling about 2,000 people, the Lisims Nass Valley RCMP serviced the traditional territory of the Nisga’a Nation. Kerton immersed herself, joining the Gitllaxt’aamiks Traditional Dancers, participating in Hobiyee festivals, volunteering for various feasts and Christmas present drives, and participating in Pulling Together canoe journeys, aimed at bridging the gap between police and Indigenous communities.

“I never knew that I would open myself up that way,” Kerton says.

“It kind of brought me back to being a more positive, stable member of the community rather than isolated in the city. It was actually very humbling and it changed me. It was beautiful.”

While parallels between being an elementary school teacher and frontline police officer might not seem obvious, Kerton points to parallels and opportunities for personal growth.

“You’re learning and educating at the same time when you’re a new teacher, and then when I became a police officer, you’re constantly learning over your first five years, and then after that it’s teaching and learning as you learn new skillsets,” she explains.

“And a big part of that is learning a better way in a more mindful way, because at first you’re just trying to figure out the steps of an investigation. But then you evolve a more mindful approach where you’re more helpful to people who are having mental health crisis or adapting to living in a new country and trying to understand how the world works around them.”

As for her goals in her new position at UFV, Kerton says she wants to connect and bridge local partners and communities.

“I’m hoping to bring the police and UFV a little closer so we can do some planning together to make sure we’re sharing our ideas and resources in a productive way,” she says.

“I’d also like to do some work with students and continue working with Indigenous people, to see where that takes me.”

Away from the office, Kerton enjoys snowboarding and mountain biking with her partner, and together the pair recently took up dirt-biking.