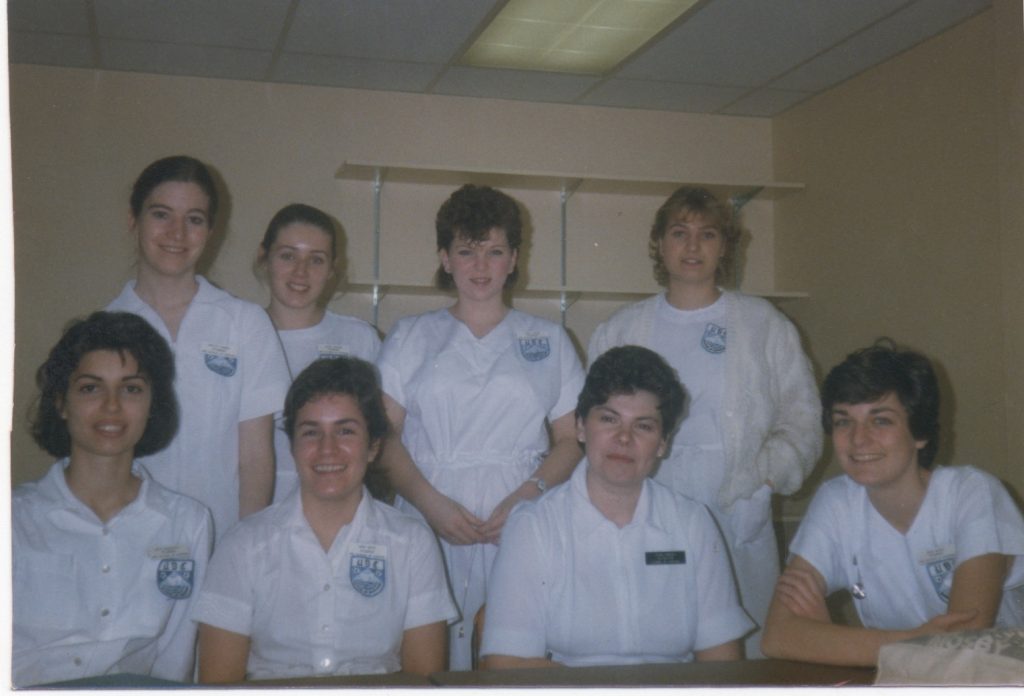 Dr. Shelley Canning (rear, far left) pictured in her first year of nursing. She’s enjoyed the excitement of September since starting teaching at UFV in 2005.

This is not their first rodeo. Heck … for some UFV faculty, it might be their 20th or higher first day of school at this university. At this point they have mastered and established first-day preparations, routines, traditions, and expectations – which have all evolved over time.

While this time of year is clockwork (literally) for faculty members there was a time when they were as new to the university as the fresh-faced freshman who fill up some of their classes.

In the spirit of a new school year and nostalgia, we asked a few faculty members to dig deep into their memories and reflect on their first day teaching at UFV and how it matches up with their experience this month.

It was supposed to be a one-year contract. 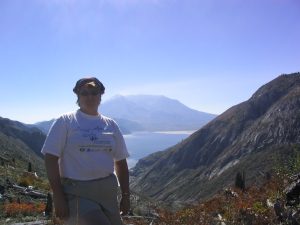 Claire Hay turned a one-year appointment into 20 years at UFV … and counting.

Claire Hay, who was fresh out of graduate school at SFU, accepted an opportunity at UFV to teach geography in the summer of 2002, filling in for a professor on sabbatical. A Coquitlam resident at the time, Hay saw this opportunity as potentially temporary. She even rented a car to interview for the job on the Abbotsford campus.

Hay might have sounded nonchalant about her new role, but once she walked onto campus on Day 1, butterflies crept in.

“I remember being really nervous, like I don’t belong,” she admits, noting she had not been at UFVs since her interview a few months prior. “I had a great case of impostor syndrome.”

When it was time to step in front of that classroom, Hay wasn’t the only one feeling nervous. She remembers the rambling chatter of students in the room – a  trend she would repeatedly see every first day.

“When I walked in, the students were chatting but immediately, things got really quiet,” Hay says with a laugh.

She eventually settled into her new role. So much so that she has hung around for the past two decades and has constantly evolved, first as an associate professor in geography, then as a department head of Geography and the Environment (now School of Land-Use and Environmental Change).

In 2020, Hay stepped away from the classroom and became a specialist in the Teaching and Learning Centre, a role she cherishes because of the opportunity to support faculty on their own teaching and learning journeys.

After a two-year hiatus, Hay’s back teaching a single geography class on Thursday nights. She conceded that losing the direct student interaction has left a bit of a void.

“That for me, was a big surprise. I thought after 18 years, I’d been there and done that. Change is good, but I missed teaching.”

During the first week of the Fall ‘22 semester, Hay got the familiar butterflies she experienced in 2002. Gone are the old overhead projectors and chalkboards. But acknowledging the new technology and faces in her classroom has conjured up sentimental feelings on her milestone anniversary.

“I am a lot more confident in my own skin now than I was on my first day here,” she says. “Walking back into that classroom has been a cool little piece of reflection for me.”

Nostalgia and gratitude were expressed in the form of a tweet written by Dr. Michael Corman on September 7: 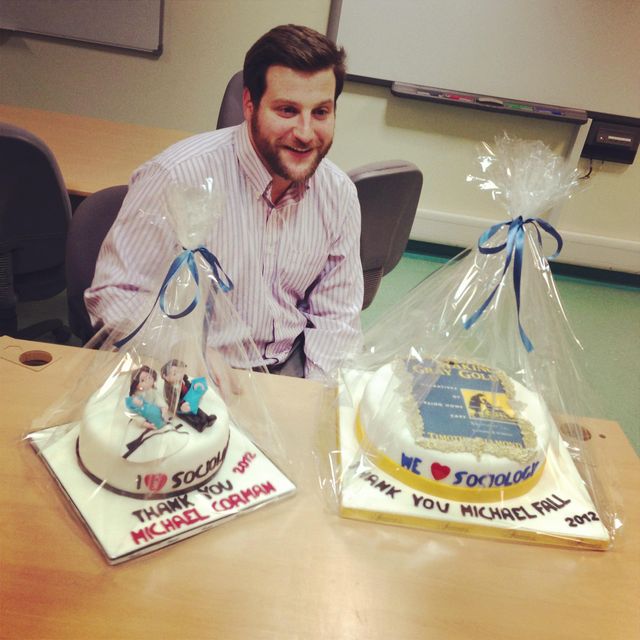 Mike Corman in 2012: his first semester as an assistant professor at the University of Calgary in Qatar where he taught sociology in the Faculty of Nursing in Doha.

After holding teaching and research positions in Canada, Qatar, and the United Kingdom for over a decade, Corman began his journey at UFV in the fall of 2019.

One of the main differences he immediately noticed was the calm and bright, natural aesthetics of the university and surrounding areas. He remembers beautiful, blue skies on his first day at UFV, with hoards of vibrant students roaming around the Abbotsford campus. Even the classrooms were noticeably larger and seemingly brighter.

“I remember that first day like it was yesterday,” he says.

Although those early months of Corman’s inaugural year at UFV were filled with memorable moments and spirited discussions with students, his teaching experience changed drastically –  along with the rest of UFV’ faculty – in March 2020 as the Covid-19 pandemic instantly altered the school year and people around the globe’s way of living. Corman was able to adapt quickly to the remote model since he had experience teaching online at previous institutions.

“We were all essentially thrown off by the pandemic,” Corman says. “But I kind of learned how to create an equitable, diverse and inclusive environment online, which is hard to do.”

At the start of this UFV school year, there is a sense of normalcy that hasn’t been seen since Corman’s rookie year here. While he thrives on the face-to-face energy in the classroom and enjoys roaming around that bright and green Abbotsford campus, Corman is cautious to compare the experience to pre-pandemic levels. He still masks up in classes because of his desire to protect the most vulnerable.

But as Corman entered his fourth year at UFV and 15th year of teaching overall last week, a familiar feeling inspired him to write that tweet.

“There is nothing like the first day of a new academic year and seeing students who are eager and excited to learn,” he says. “I’ve been doing this for a very long time–more thana third of my life – and every single new year still gives me that same excitement and hope.”

Above on the projector screen, in front of a new group of aspiring nurses, Canning introduces herself through images of her family. This includes a photo of her children and a photo of her late mother, who was her mentor and also a nurse. In that same PowerPoint presentation, she shares her love for the Vancouver Canucks and FIFA soccer.

“It’s my way to connect to the new students and kind of say, ‘this is me,’” says Canning, associate professor in the Nursing (BSN) Program, as well as Director for the UFV Centre for Education and Research on Ageing (CERA).

It is a tradition that dates back to 2005, when Canning joined UFV as a professor after a long career in nursing practice. At that point, she felt stuck and didn’t feel she was making the impact on the humanistic side of the profession that she was hoping to.

In 2005, Canning’s husband was a public school teacher and her kids were in school, so their schedules were now aligned, and September signified an annual new beginning. Arriving on the now-defunct UFV Chilliwack North campus 17 years ago for her first day of teaching, she remembers a feeling of nostalgia of being a nursing student again. The energy on the campus and in her first class gave her goosebumps.

“I remember that day sharing my experiences in health care with the kids, and it felt natural, and it felt like it was resonating,” says Canning. “I knew I was in the right place.”

In the years since, Canning has become one of the prominent faces of the nursing department with her natural leadership and her significant research work around the societal impact of ageing. She has also been with the university through major shifts. She was here when the Chilliwack North campus closed in 2012. And she was here during the global pandemic –a period she lists as one of the most difficult points of her UFV tenure.

Returning to campus this year under more normal circumstances has felt like a breath of fresh air for Canning. On the first day of the Fall ‘22 semester earlier this month, she saw students she has not seen in-person in more than three years – some who have started families since. She has also seen the familiar cluster of naïve and ambitious new nursing students hanging out in the hallways outside of her classroom.

“And every year I look at them and I wonder, ‘are they my students?’ And sure enough, they trickle into my classroom like little ducklings,” she says. “That moment always makes me smile.”

Just like every other school year, Canning then proceeded to introduce herself. This year she added a new picture to her PowerPoint slideshow: one of her first clinical group while as an undergraduate herself at a different moment in time.

“I said, ‘actually this is me when I was exactly at the same point that you are right now.’”