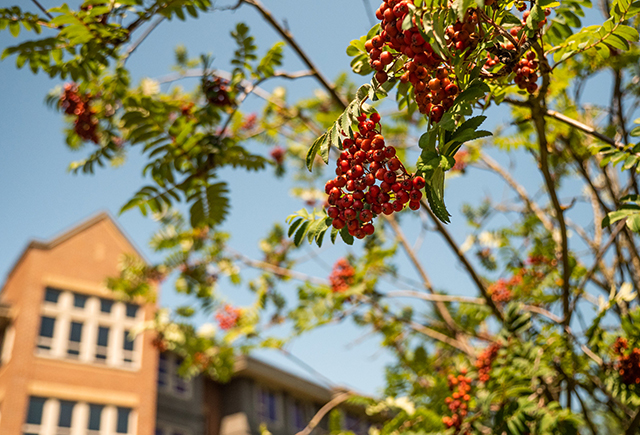 The pollinator garden at the Lá:lem te Baker building was created to help repopulate the local ecosystem.

Just behind the Lá:lem te Baker student housing on UFV’s Abbotsford campus lies a new, neatly manicured garden. Lush green shrubs blend in with an assortment of flowers, herbs and plants. Some are in full bloom; others are just sprouting.

Although it is serene, the garden — which spans almost 100 feet  — serves a greater purpose. The planners behind the pollinator garden at UFV were intentional, prioritizing functionality and social responsibility over aesthetics. They followed a saying commonly quoted in environmental circles, based on Indigenous teachings:

“We do not inherit the earth from our ancestors; we borrow it from our children.” 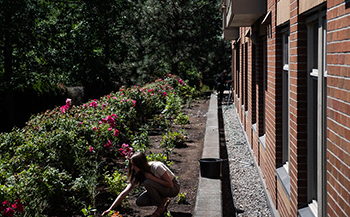 The garden also provides a teaching space for courses on plant, invertebrate, and vertebrate biology as well as biodiversity and conservation.

“If we are going to preserve our land for future generations, we have to immediately address the current realities of the state of the earth, as well as how our collective actions are contributing to that,” says Jennifer Martel, sustainability coordinator in UFV’s Office of Sustainability.

The Fraser Valley has seen firsthand the impact of climate change in the past year.

An estimated 3 million honey bees perished in the devastating floods that rocked the Fraser Valley in November. Countless more died in the heat dome just four months prior. A large number of other vital pollinators such as butterflies, moths, bats, and birds were also suspected to have been affected in these historic – and likely more frequent in the future – climate disasters.

Constructing a pollinator garden was a way to help repopulate the local ecosystem.

“As a major agricultural hub of Canada, the Fraser Valley relies on the free labour provided by pollinators to maintain the health of the crops,” Martel says. “We are providing a space for pollinators of all sorts to refuel and get the nutrition they need to carry pollen to nearby farms and gardens.”

The pollinator garden at the Lá:lem te Baker building is one of many planting-related projects the university is proposing. The extreme heat of the summer of 2021 damaged some of the grounds on campus. UFV is planning on launching a community garden in the near future, but chose to start with the pollinator garden. The kickoff event for the pollinator garden was led by biology professors Alan Reid and Sandra Gillespie in March as part of UFV’s March for Sustainability series.

“We planted a couple different sections,” says Martel. “One row is actually an herb garden, and so people will be able to go there and grab some sage, basil, rosemary, and various thymes.”

The largest row in the pollinator garden is made up entirely of native plants that vary in size, shape, and colour to make it a suitable space for different pollinators to feed off.

“In order to stabilize the ecosystem, we must return to a more healthy natural position,” adds Reid. “Using such plants as ninebark, elderberry, Douglas aster and other Indigenous plants will encourage a wide range of pollinators to return even if briefly. We have tried to encourage flowering throughout the growing season so we can have a variety of blooms present at all times.

“We cannot forget that plants are not optional. They are a necessity.”

This effort is a collaboration between a variety of UFV departments such as the Office of Sustainability, the School of Land Use and Environmental Change (SLUEC), the Biology department, the groundskeepers, and the SLUEC and Agriculture Student Associations, as well as the City of Abbotsford. The garden will not only benefit the pollinators, it will also provide a teaching space for courses on plant, invertebrate, and vertebrate biology as well as biodiversity and conservation.

“It’s been such a learning opportunity for us all learning different methods on how to grow and maintain the garden,” says Martel.

Installing and maintaining the garden will also provide students and volunteers with an opportunity to get involved.

“So many have expressed a desire to do whatever they can to help with sustainability in the world around them,” says Martel. “This can also help address the ‘eco-anxiety’ that so many young people face as a result of the current climate and environmental crises.”