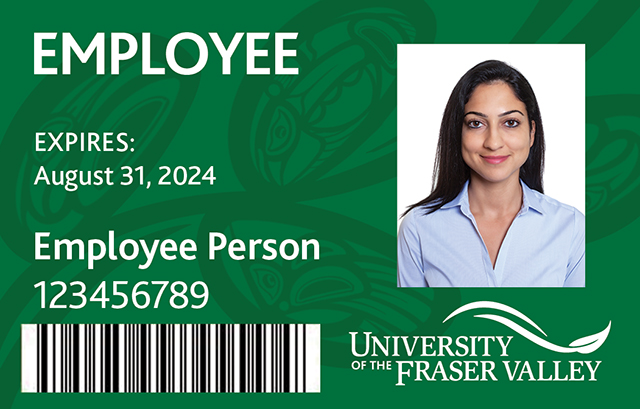 Receiving and using an employee card is generally a standard, non-glamorous formality for new hires in any company or organization. The card’s functions are transactional, typically used to access buildings, take out library books, and perform other routine tasks.

But for many, an employee card can also represent a sense of identity, belonging, and a validation of the hard work that landed them where they are. At UFV, it can mean being part of an inclusive, progressive and innovative community.

“The old campus card had been in place since 2007 and we have had several discussions over the years regarding updating it into something more meaningful,” says Sheila St. Laurent, Campus Card coordinator, UFV Campus Card office. “We wanted to eventually incorporate the UFV vision and values into the design.”

“When the Campus Card office told us that they were looking to incorporate Indigenous elements into the design, we reached out to Chantelle right away,” says Willock, referring to Chantelle Trainor-Matties, a local Indigenous visual artist who specializes in illustration, graphic design, painting, and mural work. “Chantelle is incredibly talented and appreciates being a part of UFV’s efforts to Indigenize the institution.”

Trainor-Matties, who is Nisga’a and Metis and earned a Visual Arts diploma from UFV in 2020, has collaborated with the university on several design projects such as the ​​symbol for the Lá:lem te Baker student housing as well as commemorative UFV Alumni wine labels.

Even with a small, wallet-sized canvas to work with, Trainor-Matties seamlessly merged Indigenous themes of contemporary Northwest Coast formline art with imagery from UFV’s coat of arms such as the blue heron, hummingbirds and sturgeon. Trainor-Matties even incorporated legacy design elements like the swoop.

“It really is a brilliant design that aligns with who we are as an institution,” says St. Laurent, noting that the technical capabilities of the new card will remain the same. “Handing out an employee card with meaning is just one small personal component that new employees will be welcomed with.”

The card will be available in August for new employees and existing employees with expiring cards. St. Laurent estimates in a normal school year, her office prints between 8,000-10,000 cards, including employee, student, and alumni cards. UFV has approximately 1,500 employees, and St. Laurent and Willock hope that every one of them will carry the new employee cards with pride.

“I hope that it sparks curiosity and interest into the relationship between UFV and the Indigenous community, as well as understanding the significance of the coat of arms,” Willock says. “It’s more than just an employee card, it’s now something that is woven into our identity as an institution.”