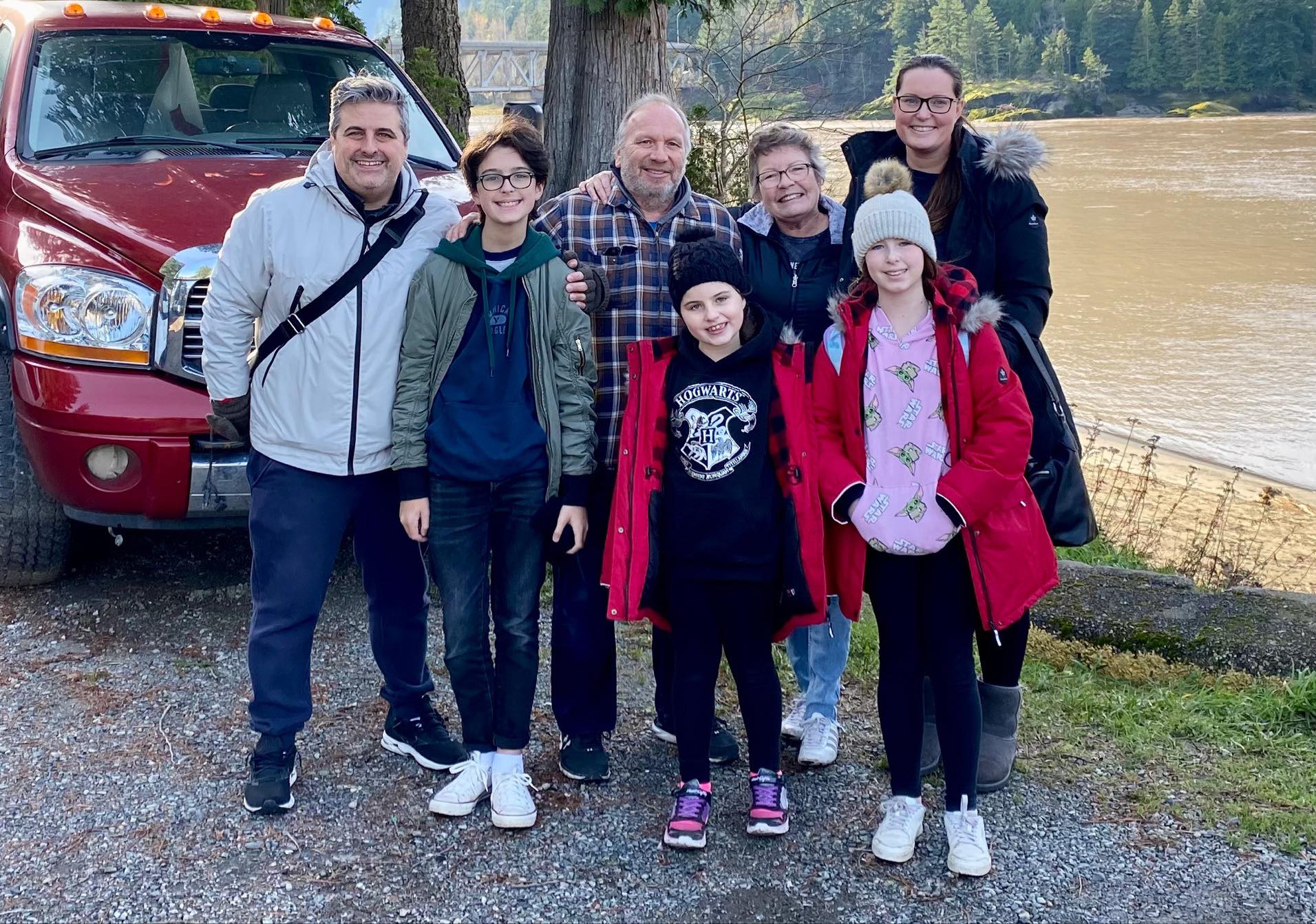 The Teigen family with their hosts and new friends, Dave and Heather Mate.

On Sunday night, Mike Teigen and his family were inside their Honda Pilot just outside of Hope, BC, staring ahead at a highway submerged in water, when they realized they were out of options.

They couldn’t go west on Highway 7 towards their home in Mission, as they had tried to 90 minutes earlier, because massive landslides and flooding in between Hope and communities to the west had caused road closures. Now, they couldn’t go the other way, back to Osoyoos where they were visiting family, for the same reasons.

Teigen, associate director of digital strategy and engagement at UFV, had made the trek hundreds of times in the past 20 years and was used to being at the mercy of the elements.

After being turned away from an RV park in Sunshine Valley that was full, Teigen, his wife Laura, and their three kids (Isabelle, 7, Emily, 10, and Benjamin, 13) were preparing to spend the night in his car. Fortunately, they were able to find shelter at Grace Baptist Church in Hope, where there was a power outage. 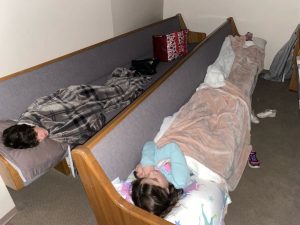 “We each grabbed a pew and tried to sleep,” says Teigen, who joined UFV in September. “We were able to sleep for the night there, which was great, but there were a lot of different people there. And during COVID, it’s weird because you try to stay away from people for so long and now you’re trying to sleep near everyone, hearing multiple people snore.”

Teigen and the rest of the people in that Baptist church were among the tens of thousands of people caught in the crosshairs of historically one of BC’s worst storms. Abbotsford, where one of UFV’s main campuses resides, suffered major water damage to homes, businesses, and infrastructure. Multiple evacuation orders have been issued in Abbotsford and other communities such as Yarrow, Merritt, and Princeton.

Several people within the UFV community were directly impacted.

“That’s when it started getting real for us,” says Kinvig. “The Nooksack River has flooded several times since we moved into the neighbourhood in 2009, but the water hasn’t crossed into our area in any significant way. But you could tell there was a different urgency about this.”

Even with the warning signs, Kinvig went to work the next morning and his kids attended school. But, just before noon on Monday, his wife called informing him that a firefighter had knocked on the door and given them an official evacuation alert. The alert became an order soon after but the Kinvigs had already started packing and made the decision to leave.

“I immediately went home and helped my wife pack a couple suitcases,” he says. “We’d been told to pack enough clothes for three days.” 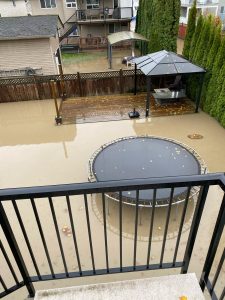 Dan Kinvig’s yard in Huntingdon, near the U.S. border in Abbotsford, on Monday afternoon.

By the time they finished packing, they noticed that their backyard was completely overflowed and the water was starting to come up along the sides of the house. While the evacuation alert for Huntingdon had yet to be upgraded to an order at that point — it would soon after — the Kinvigs made the decision to leave immediately.

“At that point, we immediately got out of there,” says Kinvig, who notes their home did not flood, fortunately.

For the next three nights, they stayed at his friend Matt Guynup’s family home, whose own teenage children gave up their rooms to accommodate the Kinvigs. Guynup also has a UFV connection: he is an assistant coach for the UFV men’s basketball team.

“I know there are many people in our community who aren’t as fortunate as we are,” says Kinvig. “A lot of people —  I’m thinking of farmers in particular —  have already lost more than we could possibly lose even if the flood waters were to continue to rise. I can only imagine the stress they must be under, and our family is praying for all of those impacted.”

Teigen’s family, too, were able to arrange housing (and newly restored power) at the home of Dave and Heather Mate, the parents of friends, in Hope. 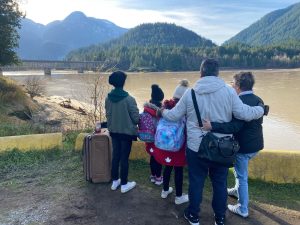 Teigen family waiting for the boat with new friends.

“They took us in and they’ve just been the most gracious people that we could stay with,” says Teigen.

After three days in Hope, Teigen and his family were able to return to Mission via a boat ride on the Fraser River from a friend of a friend. While it has been emotionally draining, he has been inspired by the humanity of the Hope community.

He thinks back to the road worker and RV park attendant who directed them to safety. The people at Grace Baptist Church who gave them shelter that first night. The citizens in Hope who are not hoarding groceries, considerate of their neighbours, and, like his hosts the Mates, are opening up their homes to strangers who are displaced and are in need.

“It was really comforting to know that there are still groups of people that at their core, want to be helping,” says Teigen. “I’m not only grateful for what the community has done for my family in the past week, but am proud of the selflessness and compassion they have.” 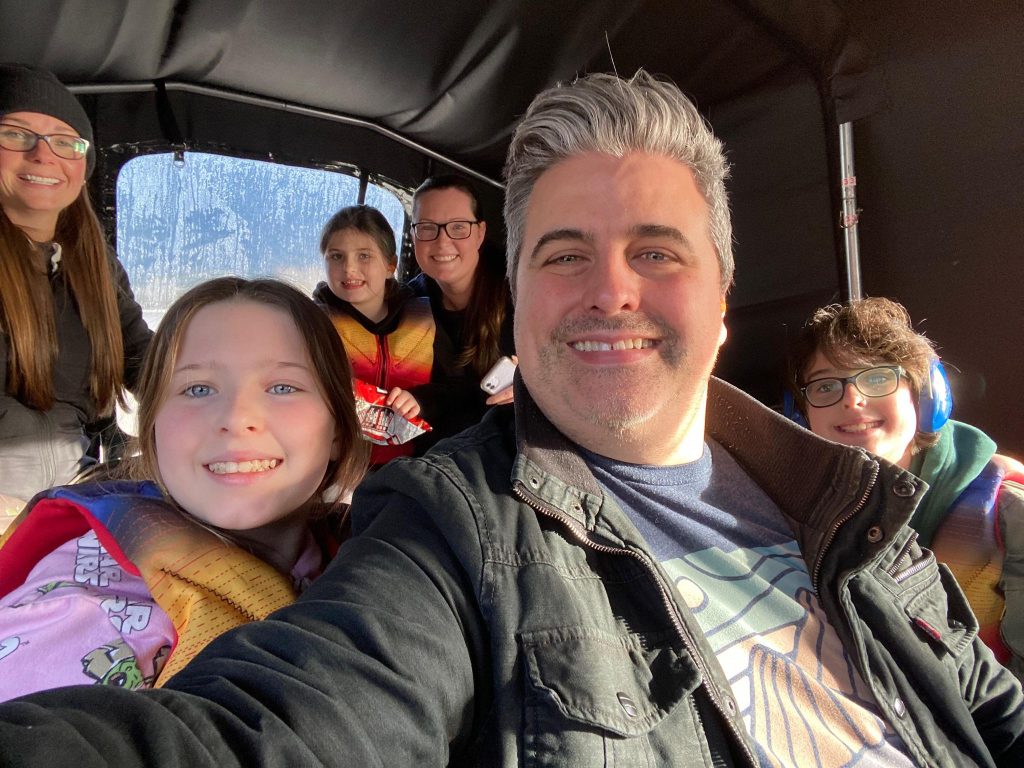 Headed home! The Teigens were transported back to Mission by boat.

If you want to provide financial support to those in our communities affected by the floods, the Abbotsford Community Foundation (ACF), the Abbotsford Chamber of Commerce (ACOC) and the University of the Fraser Valley (UFV) have jointly established the Abbotsford Disaster Relief Fund

Donations to the Abbotsford Disaster Relief Fund can be made online at https://abbotsfordcf.org/disaster