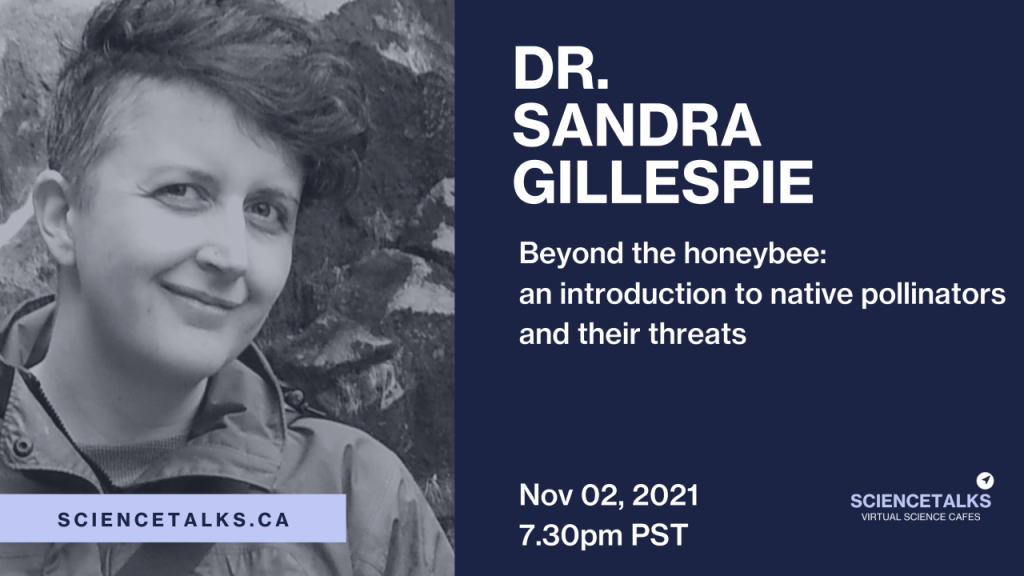 Dr. Sandra Gillespie’s lineage explains plenty. Growing up in the Fraser Valley in a family of biologists, she developed an affinity for the outdoors and all of the species that inhabit it.

“My interest in the natural world started naturally from being around adults that encouraged observation and curiosity,” says Gillespie, an assistant biology professor at UFV whose father Dave was an entomologist and whose mother Beth taught biology at UFV for many years.

While her upbringing exploring the vast range of ecosystems in B.C. directly contributed to an eventual career in academia and biology, it wasn’t the catalyst for choosing bees as her area of focus.

It was her professor and mentor at Simon Fraser University, Dr. Elizabeth Elle, who drove her to the yellow and black insect.

“Dr. Elle studied pollinators,” she says. “That was the turning point where I became more interested in understanding bees.”

After completing her PhD at the University of Massachusetts, she has continued to conduct research that focuses on pollination ecology. Bumblebees, she says, are particularly widespread and fascinating pollinator species.

A faculty member at UFV since 2017, Gillespie works with students to study the diversity and health of both local bumblebee populations and other wild pollinators. She has two focuses in her research: She works on pollination issues in agriculture, recently wrapping up a project looking at pollination in cranberry crops in the Fraser Valley; and she also studies the health and diversity of wild bumblebee populations.

“With the help of UFV students, we are studying the pathogens that infect native bees in parks in the Fraser Valley,” she adds.

Gillespie will share some of her research findings as part of the Science Talks virtual series. On Tuesday, November 2 at 7:30 pm, she will present Beyond the honeybee: an introduction to native pollinators and their threats. Register for the talk here.

There has been a drastic decline in the bumblebee species over the past decade. Pathogens and parasites may have contributed to the decline. Here in the Fraser Valley, bumblebees are crucial pollinators for several high-value crops.

In her Science Talks, Gillespie hopes to educate people about the diversity of bees, their importance as pollinators, and what the general public can do to help.

“I find that the general public knows that bees are in decline and that this is a concern,” says Gillespie. “But people generally know quite a lot about honeybees, but less about the amazing diversity of native pollinators and what can be done to conserve them.”

Going forward, Gillespie is planning to continue monitoring bumblebee populations in local parks. She notes that pollinators, particularly bumblebees, are facing a number of changing pressures in the Fraser Valley related to land-use change, climate change, and invasive species.

“I hope to gather data that will help mitigate those impacts,” she says. “I’m also planning on continuing my work on pollination in agricultural systems to help farmers manage pollination issues in their crops.”

To find out more about Dr. Sandra Gillespie’s research on pollination ecology, check out the Science Talks presentation on November 2 via Zoom. Register at https://www.sciencetalks.ca/.