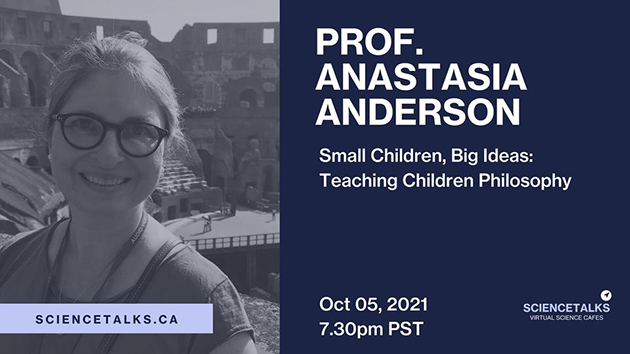 One of life’s simple pleasures for Anastasia Anderson, an associate professor of philosophy at UFV, is witnessing children think, comprehend and communicate on an advanced level.

At the annual Thinking Playground camp in late August that she helps organize, children and adolescents alike — some of whom have attended for the past several years — displayed significant growth during the two-week camp. They became more comfortable questioning implicit assumptions, testing universal generalizations against counterexamples, and giving reasons to support what they say.

“I think what I love most, though, is when children begin to signal that they are really listening to each other by building on each other’s ideas and responding directly to each other’s arguments,” says Anderson.

“Our camps are really geared towards fun and so even though they are educational camps, and the children engage in some deep thinking, it doesn’t feel at all like school.”

Over the past two decades, Anderson has taught philosophy at UFV and co-authored a textbook on reasoning called Think it Through: Reasoning in Everyday Life. She is also the director of the new UFV Centre of Philosophy for Children, which launched in spring of 2021.

In addition to the centre, Anderson will continue the child development theme by presenting Small Children, Big Ideas: Teaching Children Philosophy as part of the Science Talks virtual series on Tuesday, October 5 at 7:30 pm. Register for the talk here.

As a teenager, she first noticed the correlation with children and philosophy.

“When I was a teenager, I had several jobs working with young children, and I was always amazed by the deep and interesting questions they asked,” says Anderson, who has three grown children. “I realized that when I took their questions seriously, we could have wonderful discussions.”

“I expect that there will be a general audience made up of community members interested in education for thinking and curious about what it means to do philosophy with children,” she says. “I hope they will learn a bit about what we are planning to do at the centre and why it is worthwhile.”

There are big plans at the centre in the upcoming year. The Philosophy department will be offering a course called “Teaching Children Philosophy”, where UFV students will have a chance to connect with children in the community.

On top of the summer camp, the centre has been promoting and supporting the Regional and National High School Ethics Bowls, where local high schools students form teams and engage in fun and challenging competitions. The centre is also in the beginning stages of planning a speakers’ series/workshop called Amplifying Indigenous Children’s Voices in Philosophy for Children that Anderson hopes will run in early 2022.

“It gives our team enormous pleasure to see children grow and get better at critical, cooperative, and creative thinking and to see them enjoy thinking together,” Anderson says. “The entire team is deeply dedicated to the goals of helping children become careful thinkers and wise people.”

To find out more about Prof. Anastasia Anderson and the UFV Centre of Philosophy for Children’s work on critical thinking for children, check out the Science Talks presentation on October 5 via Zoom. Register at https://www.sciencetalks.ca/.